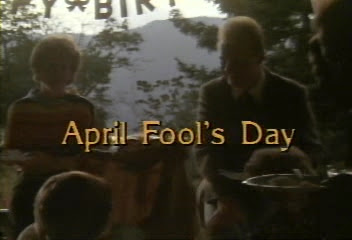 One day, Muffy St.John invites her college friends to her parents' secluded island home for one last gathering before living a life of jobs, sex and middle age mediocrity. Her friends, your would-be stereotyped gang of surprisingly decent looking and most realistic set of teenagers I've seen in a slasher (featuring none other than Amy Steel from Friday the 13th Part 2), finds out that the island home can only be reached by boat and, on board, they play elaborate pranks on one another as that day's April fool's day. Unfortunately, one bad prank gets off to a bitter end when it caused one of the boat's crew members to fall off and have half of his face shredded on the boat's propeller! As soon as they reach land, said crew is taken to the nearest hospital, never to be heard of again...or will he?

The gang, though indeed bitter about the accident, continues with the gathering and discovers that the house is rigged with more pranks like exploding cigars, rolling-chairs and even holed drinking glasses. But soon the jokes go from fun to disturbingly personal: newspaper clippings, tapes of babies crying, hollowed eyed paintings with a figure watching them, someone is playing with them and they're playing it rough. Soon, people starts to disappear and reappearing as corpses. It's April Fool's Day and what was once a day of fun is now a run for survival.

Basing the movie on the classic Agatha Christie whodunit And Then There Were None (or also known as Ten Little Indians), the film closely follows the book's plot of a group of people fished to a small island, only to get killed off by one of them who is secretly insane. In here though, the plot is mixed with a pre- Scream "self-satire" which is made clear once we get to see the final twist. Until then, April Fool's Day plays as a downright straight 80s backwoods teen-kill with an extremely tame violence.

Surely, if one had done his/her research on this film, you may have an idea or two about this film's little "secret" and why it's so underrated among some of our slasher fan brethren. I wouldn't blame them, the movie was an enjoyable run as, pranking aside, the cast here are well acted and their characters are far from annoying. Yes, they have sex and they like to party, just like any other teen meat waiting in line to be slaughtered, but these kids here are a likable bunch as you can tell they're really close and they're a bit more complex than your average sluts and jerk-jocks. It's quite a change but really workable as once the shit hits the fan, you can really feel for them.

I can't really say much about this film without giving away the twist; once you see it, it will all depend on how well you could take the joke and how loyal you are to the slasher genre. It was the late 80s and audience demanded new takes on their beloved horror sub-genre and April Fool's Day took a risky yet fairly underrated attempt. But looking at its production, some good story angles and (despite offscreen) some delicious killings going so well with its build-up, I have to say this film deserved more than what it is getting right now. The Butcher Brothers (who also directed The Hamiltons and The Violent Kind) thought so and decided to remake this film in 2008, but they ended up doing a shit-hole movie that I'm more gladly to piss on together with 2008 Prom Night remake. Appreciate the deeds, mates, just not there yet.

What else can I say? Relax, have fun and 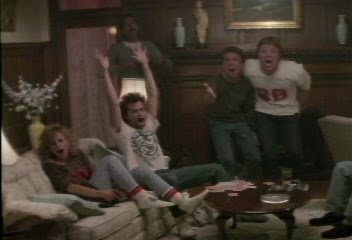 (Fun idea: watch this back to back to back with Slaughter High, Killer Party, Pandemonium, Scary Movie and Student Bodies for an APRIL FOOL'S DAY HORRORTHON!)