I thought it sounded like you were speaking through a rubber chicken! : Student Bodies (1981) 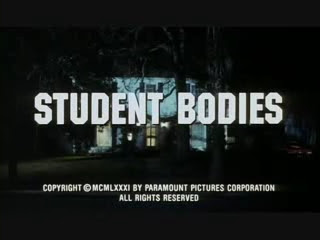 Save Toby Badger, our proud bookworm virgin who thinks sex is bad and dirty. After a funeral held in the school grounds, it's Lamab High's Big Parade, Big Game, Big Dance and the last day of school and more of Toby's horny friends get murdered with even more obscure weapons such as an eggplant, a tiara, a chainsaw...case, and, my personal favorite, a horse head bookend! Being the only virgin in her school, it's no wonder why she gets pinned to these murders, so it's only a matter of time for her to prove her innocence and put a stop to a heavy-breathing killer who couldn't get a break from stepping on sugar-free chewing gums!

Let me be frank here, I WORSHIP STUDENT BODIES! Yeah, years ahead from parodying more slashers, Student Bodies prematurely captured the very essence of a early 80s classics such as Prom Night, Black Christmas, and Halloween among all things, and fooled around with it with much craziness and stupidity that will keep any slasher fans laughing! The plot here is as simple as any known slasher film one can imagine, giving it enough time to play around with the parodies and spoofs on cliches such as horny teenagers, who's suspiciously dumber than a one-celled organism, finding any place and any time as the perfect time for sex, may it be a funeral, a parade, or even during a football game! These sex-starved morons definitely got their just desserts soon enough as the killer keeps finding odder and odder means of killing them.

Of course, we also had the useless adult supervisors, who may or may not be as helpful as they believed they are! Not unless you count a psychiatrist who flirts with his patients and asks them to call him daddy, or a dean who volunteer to answer the phone cuz she's the furthest, or even a weird shop class teacher who's in-love with horse head bookends, as helpful? If you do, I'll be damned. At least the Creepy Janitor helped. (That guy's quite a sight, too! Apparently this is his only movie and we never get to see him act again...)

Unlike some of he overcooked parodies done today, Student Bodies kept the humor alive with witty observation, catchy quotes, pure Airplane!-inspired randomness and fourth wall-breaking pop-ups on important plot points and idiocies like unlocked doors and the body counts. Among all of these, however, the film still managed to keep it from falling apart into overdone parodies that tries too hard to be different, by sticking to what the audience would know and react to, instead of mish-mashing everything a parody can throw in and just butcher everything to the point that it's offensive and rude. Yes, it had jokes on the Black community, the disabled, foreign students, but didn't overdo it with repeated hitting, and kept it all subtle. Some of the random moments is just is; can a rubber chicken really change someone's voice? Can a tiara placed upside down kill people? It doesn't! (a least not in this reality) And it happening is just what makes it so absurdly funny! (plus it's a parody comedy. Why on Earth would it make sense?)

The effectiveness of  the jokes still falls to the audience's take on a parody as in their sense of humor; some of the jokes may fell flat for one, a little cheesy for some, but a riot for another. Not that's its something new as a case; nearly all comedy films, or films in general, relies on taste and perception to grad an audience's attention. Just that, in this film, it's a win-lose scenario in it's style; even if I enjoy the film in totality, there's n denying the some flat moments that didn't seem quite catchy. If that's a tough cookie to crack, it even sports a even bigger problem than that. Depending on how well you can forgive a film, this one had a very weak ending; rushed and off from the film's parody take, making it quite a stick in the mud that sorta parodies the shock ending from Carrie. Should have been funny, but it's too serious in its tone and it felt a little dark.

Above all, Student Bodies still had more ups than downs; it can't surely win everything, but that shouldn't stop a slasher fan from seeing this cult classic. It's ahead of its time, and maybe a little outdated in today's standards, but Student Bodies is a laugh riot no matter how you see it! Just remember: garbage bags are strong enough to trap people inside, KFC chicken can be fixed with tape, bloodstains on the creepy janitor's hands might be his pee, and switch off. Just switch off. Student Bodies is funny. Period. Comma. Question mark. EXCLAMATION!