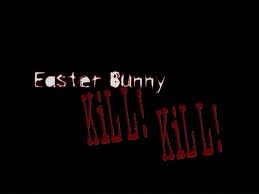 Best way to celebrate our Lord and Savior's return from his mortal death? How about a slasher flick-cum-family drama about an autistic kid, an asshole boyfriend and a killer in a plastic rabbit mask? Not Christian you say? Well, mate, I ain't no ordinary Christian so put up or shut up, this is gonna be good~!

Meet Nicholas, a very special sixteen year old boy who loves Easter since that was the last day he saw his father alive. He lives with his mother, a working nurse doing her best to make a living in a really dirty suburbs, and has to deal with Remington, a white trash robber who just robbed a store clerk as early as the opening act and shooting the poor guy's head clear off just to prove he's an asshole.

Now, Remington is dating Nicholas' mum and, using his "charms", cons his way into a believable father figure. Not good since he loves to torment the poor kid from smothering him to near death, to verbally abusing him behind his mum's back. To further exploit his asshole-ness, when Nicholas was given a rabbit by a random hobo, Remmy found his pet and threatens to kill the animal if the young boy doesn't let him move in with his mum as, it turns out, the store killing didn't go unnoticed and now he needs a place to hide.

As Easter arrives on the next day, Mommy suddenly got called in to do overtime, foolishly leaving Nicholas under Remington's care. As any bastard would do, he decided to throw out some coke and hookers for some fun, along with a pedophile with a walking problem.

But unknown to him, someone else decided to crash the party. Someone in a bunny mask, armed with a wide load of powertools and a taste of vengeance for those who treated Nicholas badly.

The film is trashy at its best with a whole lot of cheese; Easter Bunny, Kill! Kill! is one of those gritty, retro-indies that dares to go further than any mainstream horror would go, tackling sensitive issues such as a mentally disabled protagonist, white trash lifestyle and slow-moving pedophiles, all contrasting in tone to the marketed religious hallmark of the day.

While it boasts some nifty gore and a cool-looking killer, the film is undeniably cheap, showing up from time to time with its pacing problems and scripting. Some of the acting were fine; Ricardio Gray as Nicholas may resemble an exaggerated version of an autistic but as the film progresses, he managed to show a sympathetic side that you can't help but feel for the kid. Timothy Muskatell as Remington, however, is a gamble; there are times when he can be a believable ass but sometimes he does it so over-the-top, he's laughably cartoonish. The rest of the cast were fine, I don't really give much of a hoot bout them since they're meat.

Still, even with this little flaws, Easter Bunny Kill! Kill! is still a fun watch in a level of badness that it is entertaining. With all the grimy, nihilistic, vulgar overtones, Easter Bunny, Kill! Kill! alo did one of the most cheesiest ending I've seen and two shark-jumping twists. Not to spoil much, but a lot of details were overlooked and the twist just came in too casual. Then again, a lot of scenes in this film were mediocre and surprisingly cheesier than it is supposed to be. Evil stepdad who dances while singing "hookers and cocaine?" Yeah, this movie is begging us to laugh at these scenes.

Okay, so it's not entirely bad nor is it good. It's still forgivable with its silliness and its watchable as an absurd slasher film. Guess this little nasty beats hunting Easter Eggs. I mean who would want to hunt innocent unborn baby chicks if you could kill bad guys and coke sniffing hookers? Sounds like a reasonable alternative for me!