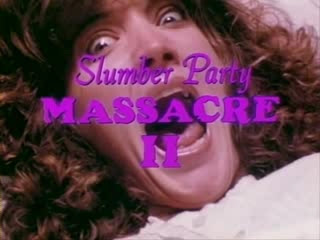 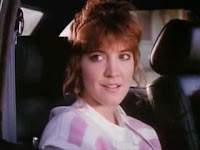 Well, this was anomalous. While it did have the two (re-casted) gals characters from the original, nearly everything about Slumber Party Massacre II (1987) is different. Very different.

In here, the story focuses on Courtney, the brash and rebellious sister from the original and one of the survivors of that fateful slumber party from hell. She's been having some serious nightmares lately, all involving the night the slasher attacked, as well as about her older sister, a fellow survivor, who is now locked up someplace padded with white walls. I'm calling it survivor's guilt since she thinks it's unfair that she spends her free time rocking with her girl pals in a band, while her sister slipped further into dementia and got instituted for it some time ago. 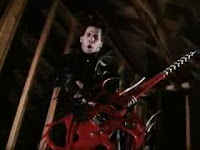 Amidst these dreams is a vision of a driller killer in tight black leather, rocking a groovy Elvis persona and a mean drill guitar. (A Drill-tar!) These visions, dreams and other assorted whatnots continue to worsen as she and her pals haul up their instruments for a stay at a secluded house to get some R&R and T&A. Of course, some boys crash in, including the heart throb Courtney's crushing on, pushing the party on full swing with some 80s rock songs and, for Courtney, horrific images and premonitions including a blood-filled bubblebath, a giant pimple, a hand-burger and a frozen chicken attack. You read all of that right!

If this ain't enough to crack our lead gal insane, when one of her friends went missing, she called in the cops (named Krueger and Voorhees) to look for her only to discover her pal ain't gone at all. Nor was she in any danger. So this deters the cops from ever showing up again, meaning for the rest of the night, the weird can happen and no one will believe them. And right on cue, for no reason at all, Mr. Driller Killer Elvis arrives into their plane of reality and starts drilling holes into her friends, all while doing a musical solo and some of the slickest moves in rock n roll history~! 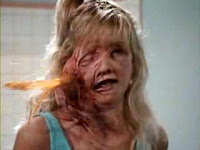 Now despite of all the things I've described about the plot, and I can't believe I'm saying this, I've fallen for this film's cheesy charms! It's far from a horror flick and more of a teen-comedy went wrong (horribly, trippy wrong), but it's cheesy and wild enough to keep one watching while, at the same time, makes you wonder if this film was meant to be taken seriously or not, especially seeing the killer took notes from almost all the Nighmare on Elm Street films and gave the wise-cracking, reality-bending persona a jab, crossing it with a 1950s rock-and-roll aesthetic. 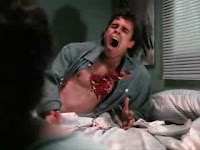 The acting here is surprisingly good despite displaying some stereotyped traits. The gore effects are awesome, with nasty drilling scenes that have blood flowing like there's no tomorrow, impressive considering this film's relatively smaller bodycount compared to the first. Any flaws I see here would include the fact that the majority of the film played around with the supernatural much like a ghost film with a gross-out humor, a direction that might deter some slasher fans who are looking for a straight bodycounter.
Apart from that is its really confusing ending, wherein the story just gone overboard on the randomness. At least it fits in quite well to the movie's drug-infused nature, however. Could it be some sort of hidden context? I dunno, it's her nightmare, not mine.

What I see here is an underrated crazy flick that I can watch again some other day. I just wished they made more flicks based on Greaser Driller here. If they did, then we would had one bonafide slasher musical that I can truly kill for! But until that time, I am proud to say that Slumber party Massacre II (1987) sits in pride among my other guilty pleasures, such as Last Caress (2010), Nailgun Massacre (1986) and, would you believe it, Redeemer: Son of Satan (1978)! Deal with it!

(Note* I can't count whether Courtney died or not. A lot of shit doesn't make sense there)