You Have The Right To Remain Silent. Forever: Maniac Cop (1988) 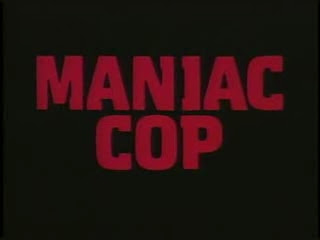 The underbelly of New York city is under the prowl of a maniac in blue uniform. Killing random people at night, the Maniac Cop has caused a stir among law enforcers and citizens alike, plunging the city into panic as innocent bystanders begin fearing their protectors and, in some extent, even ended up killing some.

Caught in this predicament is one Jack Forrest (Bruce Campbell, B-movie god and all around good guy), who got caught cheating by his wife one night and, later, suspected to be her murderer after she's found slaughtered the next day. Wrongfully accused, Jack's only hope of clearing his name falls to his girlfriend, Theresa Mallory (Laurene Landon) and his friend, Frank McCrae (Tom Atkins, fellow B-movie star and other all around good guy) whose initial police work and investigation goes deeper into a secret involving a wrongfully convicted cop out for revenge.

Perfectly merging cop-out action flick with the butchery and horror of slasher films, Maniac Cop is William Lustig's other strong cult classic, next to his masterpiece Maniac (1980). Though it isn't any improvement on anything slasher, it is B-grade magic that's worth respecting thanks to it's watchable set-pieces and intriguing plot line.

Executing hysteria while playing on societal fears of political correctness and people abusing their powers as authority figures, Maniac Cop's theme stands out among the rest of the late 80s cheese fest of teenagers getting mauled, sliced or liquefied by line-cracking killers. The script, though weak, has a plot that actually goes somewhere, lending itself to other film genres other than horror and opening opportunities on borders untouched by other slasher movies, taking a jab on the cliched action flick plot of a wronged man desperate to prove his innocence (complete with moles!) showing that a hybrid is entertaining so long as it can talk both lines with a straight face. Not to say it isn't without it's plot holes and short-comings, but this isn't new in a film of this genre so to speak, and it did handle its narrative pretty good despite this.

The performances of the B-film stars also made our cast an interesting one. Cult favorites Bruce Campbell of the Evil Dead Trilogy and Tom Atkins of Night of the Creeps both got their fair share of screen time and nailing their roles with much gusto you could hope in a low-budget film. Laurene Landon's character is a stretch on the usual clean-girl cliche of a final girl as she's a mistress and, yet, given a role to prove herself worthy of surviving and that her spunk and hardened core is enough to not only save her boyfriend, but also put a stop on a maniac hellbent on terrorizing New York.

And speaking of which, Robert Z'Dar plays said maniac, Matt Cordell, who's chin may be the only one to rival Campbell's. His role isn't exactly anything unusual, he's a basic mute boogeyman in a cop's uniform, possessesing superhuman strength, invincibility and a sharp bladed baton. He relies a lot on body language, which is all I could ask for a psycho to do and he does it fairly. My only complaint is his cheap-looking scar make-up, but it is better compared to the exaggerated zombie-esque likeness in the sequel.

There isn't much gore in here, despite it's huge bodycount, surprising since Lustig's debut slasher is anything but viscera. Maniac Cop relies more on cheap bone breaking and shoot-outs, much to answer this film's action flick influence which kicks in full throttle at the last few minutes, exercising build-up and creative direction to makes up for it's nearly tame nature, thus no short of interesting as well especially with a finale that's loaded with stunts and a brief car action.

Maniac Cop, though average in every way, made it itself to be refreshingly entertaining despite showing constraint on blood and guts, as well as shock value. It's imaginative backdrop is all it needs to keep this film watchable enough and a certified cult classic.