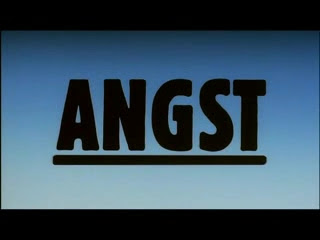 The fear in her eyes and the knife in the chest. That's my last memory of my mother. That's why I had to go to prison for four years, even though she survived.

If you think American Psycho was too tame or Henry: Portrait of a Serial Killer was a little too silly, then I have no choice but to tell you the tale of Angst.

After serving four years for attempting or successfully murdering his own mother, an unnamed psychopath finds himself so used to being imprisoned that he tries to get back in no soon after he was released. Plotting murder, the man tried strangle a taxi driver but fails, prompting him to flee into the woods until he walked into a secluded house. Breaking in, he studied each room and encounters a retarded and paraplegic man and his family, subduing them and proceeding to kill them one by one, both out of fear and in madness. No one was safe... 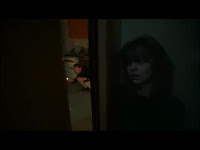 It's a dramatic play of home invasion with slasher film-style murders and the sensitivities of serial killer movies, with no plot twist, surprise endinge and nubile teenagers doing dumb things that would get them killed. It's straight-forwarded at every point, giving it a realistic aura and a disturbing look into the psyche of a killer as Angst draws it's strength from it's the narration done by the killer himself.

Forcing us to feel and sadistically be a part of his crime, the killer voices out his thoughts regarding the details explaining his life and his reasons for doing such crimes whenever he is present, which is more unnerving from the fact that the killer was based on a real sicko, Werner Kniesek, who butchered three people just because he wanted to see fear in their eyes. Our psycho here is no different from the real life villain; he wanted fear, he needs it, and he's willing to do anything to get it, no matter how nervous and disoriented he will be and thanks to a powerful performance by Erwin Leder, who captured this nature so well, the film is no short of these emotions.
Even with a small bodycount, the kills are pretty graphic, too; far from the easy and quick slasher murders, the crimes in Angst are clumsy, disorganized, and often painful to watch due to their prolonged and detailed nature, shot in a shaky, near-voyeuristic camera work, an innovative approach that heralded this film with quite a cinematography. A score by Klaus Schulze helped heighten the intensity of these scenes as well, though a tad retro at times, worked none the less on delivering a hopeless and nihilistic tone. 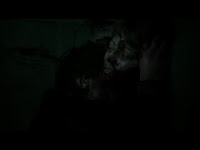 It's a bit shame that this film is rarely heard or seen. It seems that the brutality of this film was too much for its time. I can't blame them; It's a deep picture behind it's simplistic flow. Unbearable at some point, the only flaw I see here is the cardboard state of the victims, but I see no big deal coming from this since more of the focus was on our killer.

Just as films like Maniac shocked the slasher subgenre with gritty realism, Germany's take is no wuss. Near Excellent Psycho-thriller, highly worth finding.