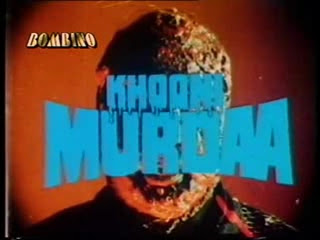 While India's Mahakaal is the epitome of an A Nightmare on Elm Street rip-off/plagiarism, from the burnt killer with the very same razor glove to the hunted-in-dreams plotting, that movie isn't exactly the first to do it.

No, Khooni Murdaa beats it for a few years but, curiously, while this has the kills mimicking A Nightmare On Elm Street parts 1 to 3, the movie can pretty much stand on its own story; the plot revolves around Rekha, a girl who's stalked by a deranged lover Ranjit. The guy has a temper the size of the Atlantic Ocean, breaking into murderous streaks whenever she rejects him, proven to us when he watches a couple make-out in their jeep, picturing them as Rekha and a lover before stabbing them both to death. 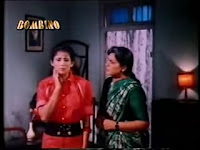 Ranjit's crimes are eventually noticed by officials and soon puts him on trial, but thanks to his insanity plea, he's taken to a mental hospital instead which he escapes from easily. From there, he searches and finds Rekha camping with her friends, only to meet his demise when they ganged up and beat him to their bonfire.

Now with a charred body of a dead maniac, the gang decided to stuff his body in a nearby wreckage instead of going to the police, fearing of getting themselves incarcerated. But even beyond death, Ranjit's obsession for Rekha is far from over and his burnt corpse is out for revenge. 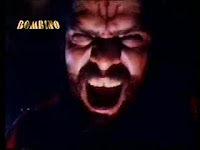 Less of an actual Nightmare on Elm Street clone, Khooni Murdaa's plot is more closer to that of House on Sorority Row or even an early version of I Know What you did Last Summer, where kids have done a terrible deed and pays it in full price with their life. That being mentioned, I find this entry a decent bunch even though its packing the same cheesiness most early day Bollywood films would include like five minute musical dance routines and the ever present kung-fu action. (One of which was thrown in randomly at the near end)

Even the killer's far from a Freddy clone, with his appearance looked less like the nightmare man and more of Mitch from Doom Asylum (1987) with his zombie-like make-up. (albeit cheap) His arsenals include long razor fingernails (both hands), as well as laser eyes and the ability to control the winds with his breath. (thankfully done very little) His witty one-liners were also replaced with pieces of romantic curses and spends the rest of the movie evil laughing.

Whilst Mahakaal's hodge-podge whackiness of all things comedic, horrific and cheesy makes it a unique experience, Khooni's didn't blend in too well due to its overwhelming serious tone, making the cheesiness of the effects as well as some bits of added comic relief felt out-of-place, hindering the film from being any better. (In fact, that darn comic relief kinda ruined the ending for me!) Perhaps this is the only problem that kept me from rating it any higher but, thankfully, the 70s/80s exploitation feel of the movie preserved whatever charm left this Bollywood movie has to offer and I'm open to welcome it as a guilty pleasure.