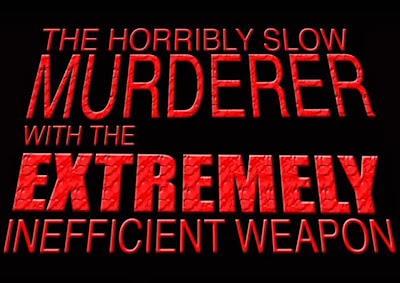 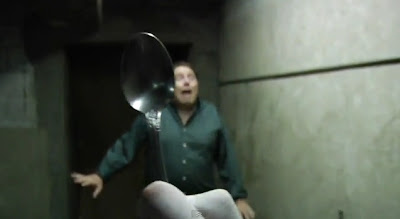 Okay, so basically, this is all the 10 minute short has to offer, and yes, I find it funny. Funny because it satires the prolonged murder scenes that's slowly filling up our horror films thanks to films like SAW and Hostel. Funny cuz it had all the cliches of a slasher killer: Slow, silent, indestructible (even more indestructible than Jason or Micheal!) and somehow can make anything a murder weapon. Such as this case, a spoon. Funny cuz it satires the never ending franchises where a killer survives a blow and goes on hunting down the same guy over and over and over again...Sidney Campbell...hi! Funny cuz it's just, plain ridiculous!

BUT-t-t-t...For a ten minute short, I'm not sure if it's worthy of repeated viewings. I mean, it could get a bit...redundant and annoying. It's more like a one-hit viewing pleasure that can be remembered for all time than a catchy song. The catchphrases, the scenes, the "plot" and the killer is memorable enough on their own and the whole short film itself might as well be a trailer for itself.

If you want to send your friends something funny to laugh at, or fancy yourself to seeing this for the first time, whether your first read it here or some site else, Go for it! It's FUNNY AS HECK!