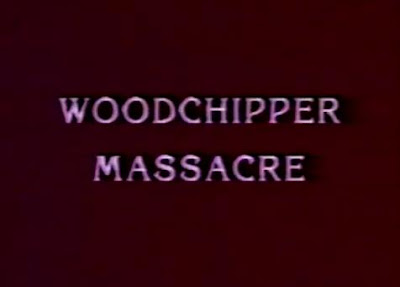 Best to end Fool's Week with something as sinister and as shocking; a "positive" review for a movie I know is hated by a lot of folks: WOODCHIPPER MASSACRE!

Yes, I have committed the crime of loving this zero budget, bad-acted, uber cheesy, uber dumb, splatter-movie wannabe piece of crap, who can't even get the box art right! (why is there a piano in the box art? There ain't no pianos here! Why not just call it Piano Massacre and had a killer, sentient Piano kill folks- wait, you know what? Forget I said that. That sounds like a great movie I can direct some day!!!)

For those who wanted to join me in my exploits of checking this film out (or at least those who just wanted to hear the entire movie), I'm gonna lay out what went down in this film; a teenage boy, his teen sister and his pre-teen brother were left alone in their house under the watchful eye of their aunt while their father left for a business trip. Turns out the idea wasn't as hot as they expected it to be when their Aunt Tess turned out to be a real nightmare (at least, for ten year olds), who kept bugging them from all things worthy of bugging to those that are not...worthy of...bugging. She criticizes everything, make them eat veggies, and complains of their rock music. So, if you live in an apartment and have an annoying old lady who kept hitting on your door to turn down the music, that's Aunt Tess.

Anywho, one day, the youngest received his Rambo knife replica in the mail and accidentally killed Auntie with it when she tried to take the knife away from him. Guess you should had mind yer own business, you old hag, with your cartoony ramblings and fake hair!...wait, is it fake? I dunno, I don't care...you dead! I'm not!

Not wanting any trouble, they decided to do the rationa shtickl: get rid of the body and pretend nothing happened. So, to dispose her, they froze her body, dismembered it and shredded it to sloppy joes with their woodchipper. All things end well (Wow, these kids had seen too many violence, cuz they ain't faze at all!), that is until their cousin Kim came, looking for ma (and some cash). Uh-oh, KIDS! FIRE UP THE WOODCHIPPER!

So, with minimal effects, bad pacing, HORRENDOUS acting (over, under, over under under done or just plain bad), and a weakly thin script, its everything any decent horror fan would cringe in fear unless they're into this shit. Me? I had my expectations set real low on this one, knowing this is a SOV movie, and hardly much of those goes up the ante, so imagine my surprise when I find myself laughing at it, and, *gasp!* enjoying it! I'm watching a terrible movie, and I'm liking it!

What it lacked in blood, nudity, gore, special effects, lighting, script, acting...well, basically anything that would had saved the film, is it's wicked sense of humor. It's more of a black comedy than a slasher, or a splatter, or, well, a horror film. Heck, it's not even a massacre! I'm certain two dead bodies doesn't cut it to be a real massacre (About fifteen to thirty, yeah, that'll do it!), but the bad acting, mixed it with the humor, kinda works so well that it's so bad at everything, it's so darn good. The incredibly stupid characters are just fun to poke and laugh at, the God-awful delivery in this film is its own charm, too. There's no higher meaning to it, just plain stupidity at its best...or worse.

That, or I need to get out more. Ironically, it was raining when I watched this film...

Well, I can't really say anything else other than how funny this film is; okay so it's wrongly marketed as a horror flick, but with it's inexperienced cast and equally young director (who also acted the cast's oldest teen soon), Woodchipper Massacre was one SOV film that got me eyeing on the possibilities of other great films of its kin. With all the bad publicity, the hate reviews that this film got, I'm not saying that they're wrong. They're dead on to their reasons on hating or at least disliking this film, but if you're looking for a weird movie to watch on a rainy day, this might do the jitter!

(For a better woodchipper killings, well, I guess Fargo would do you good...)