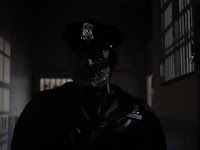 Having in his hands Jack Forrest (Bruce Campbell), the one cop who won't stop on putting an end to his reign of terror, officer Matt Cordell (AKA Maniac Cop) was an axe away from finishing off one meddling law enforcer. But with a squadron of police closing in, Matt was forced to retreat in a van while Jack jumps in and tries to take control of the wheel, distracting Cordell long enough to ran through a broken pole and impale the deranged law enforcer straight into the chest. A scream was heard, and both Jack and the Maniac Cop plunged into the river.

Officer Forrest swam to safety, believing the hulking terror is down and drowned. 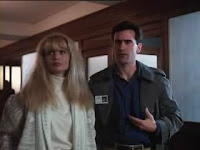 A few weeks after this fateful event, Jack and his girlfriend Teresa Mallory's (Laurene Landon) claims of the Maniac Cop being the thought-to-be-dead Officer Cordell fall to deaf ears, wherein controlling officials are prompting to disclose the truth behind the murder spree, putting up claims such as a copycat killer and delusional states of the witnesses to conceal it. As Jack just wishes to go on with his life, Teresa knows Cordell's still alive as his body was never recovered. No soon after, a new series of murders under Cordell's M.O. begins terrorizing New York again. When Jack falls under the bladed baton, suspicion on Cordell's doing is brought up once again. But when a serial rapist/strangler rears up his ugly head into the scene, Lieutenant Sean McKinney (Robert Davi) and Officer Susan Riley (Claudia Christian) has to team up to stop a homicidal ex-cop and a Times Square serial killer team-up. 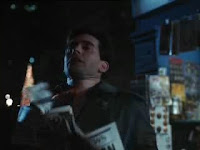 Sadly, even for a sequel, Maniac Cop 2 ties too much from the first and barely sparks up anything worth noting on its own other than a bigger bodycount (which should have been impressive for a slasher flick, if it wasn't so much on gun kills) and, dare I say, a better anti-hero.

The plot seems to be going for two directions; it's either McKinney, a hard-boiled cop who doesn't play by the rules, doing an investigation on the Cordell's case pointlessly done again here (though, the results were more promising), or Maniac Cop in a  weak attempt to characterize him. Other than a few added subplots, the whole movie just jumps back and forth around this, never taking flight beyond the premises that felt all too similar from the first. 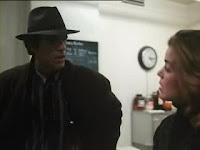 It seems the film wanted to build around Cordell's character, giving him more emotions which actually scares me. Scare cuz it's not working, partially awkward, and the whole "Cordell's my friend" cry of the film's minor antagonist hardly done anything for its own, a problem I see in attempts to do "feelings" for mute maniacs like Jason Voorhees or Michael Myers. (Albeit, Jason's frightened boy persona on Freddy vs Jason was pretty acceptable for me) What even ticks me off is this film's make-up for the character; now more scarred and almost rotting looking, Maniac Cop turned from oatmeal-paste scars to noseless zombie-look that kinda went along to his man-of-steel invincibility but hopelessly cheap looking through and through. 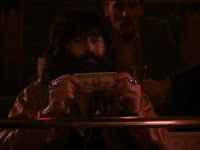 On the plus side, the murder set pieces here are still watchable. Though a little uninspired, the kills are fair and have their moments of worthiness. Bruce Campbell's death is one murder that I'm sure many fans of the series will remember and so will any Campbell fans out there. It also has two awesome massacre scenes; one taking place in a police station where in almost everybody in it are either gunned down violently or thrown away a mile above the ground (exaggerated boogieman strength, but who's thinking realistically in these films?), and another in a prison, where Cordell, while on fire, seeks vengeance to those who tried to murder him, possibly one of the series' most memorable scenes. There's also some fair number of car action sets which outdid the brief van chase scene of the first. 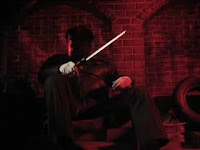 While it lacks much of the suspense of the original, Maniac Cop 2 improved on the actions film elements that the first succeeded on merging with. So, as much of a slasher, it barely moved any bars, but it's an acceptable sequel in its terms.