This has to be the very movie that introduced me to Bollywood slashers; a shameless rip-off of monster flicks like Tremors and Jeepers Creepers 2, done in the tamest slasher film fodder with zero scares, zero exploitations and zero blood. Not really the best film to start my Bollywood experience with but it did proved to be a fun one in an extremely shallow way. 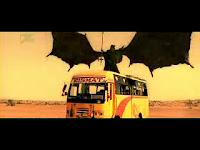 Kaalo opens with a group of construction workers doing road work on some desert. One of them somehow jack-hammered into an underground creature, which turns out to be our spear-wielding monster Kaalo, a murderous witch that can travel both through air and underground. Taking cues from Tremors, the jack-hammer man gets his feet snared and killed offscreen, while the others are impaled and beaten to death against a rock ala remake Jupiter from The Hill Have Eyes 2006 redux. 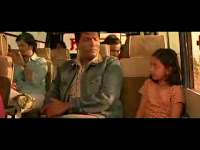 One opening credits later, we now move our attention to a bus heading to some village, the home of our hero Sameer. Along with him for the ride is a young girl traveling alone named Shona, four men on their way to a wedding, a two married couples, a photographer and his "subject", the bus driver and his conductor. After finding their route broken off by a large fissure, the bus turns to a little detour through a ghost village known as Kulbhata which is, unknown to most of them, believed to be cursed as Kaalo's hunting ground some 250 years ago. As usual, no one cares so they head on as planned only to discover that the curse is real and one by one, they all fall prey to the winged witch who is determined to fulfill her deadly agenda at all costs. 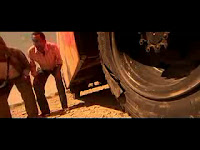 To be truthful, Kaalo definitely fails as a proper horror movie as it lacked atmosphere, bloody grue, or some deep character development, instead focusing a lot of energy on showcasing its monster. That being said, it's no surprise the film tries to be rich in crisp visuals, packing some decent CG despite the budget constraints, making up a lot of its missing horror elements with fast paced action and some decent monster attacks for a good old fashioned monster flick! 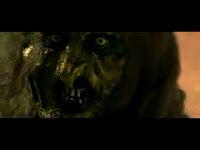 It's pretty cliche, both in terms as a monster and slasher flick with stereotyped victims, cheesy acting and doomsayer's warnings scoffed among many plot trappings to be found, but in the right timing and with the right audience, Kaalo proved to be an entertaining piece of cheesefest that most Bollywood movies are known for. It can be serious when it needs to be such as the wounded struggles of our hero as he tries to protect the girl (which thereof taken from The Hills Have Eyes remake again) but the net result is a very cheap gamble of a bad movie that has its cheesy charms.

Not much else can be said about Kaalo other than it can either be loved or hated as a simple monster flick you can watch in a rainy day/night or a shameless rip-offed merging of cult favorite B-flicks with cliches in full charge. When you see it, you can definitely level with me with either one.