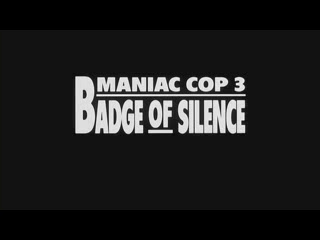 So, to start off, Matt Cordell, AKA Maniac Cop, is dead. 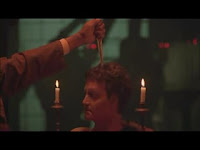 With his name cleared and those responsible for disfiguring him and ruining his life dead, the vengeance fueled psycho cop can finally rest after pummeling down into a fiery explosion of a death from the last film. Unknown to him, during his own funeral, a voodoo priest named Houngan is doing a rite to call him back from the grave for reasons I can't really point out clearly (Something something something afterlife and other unfinished business crap) and at that, the Maniac Cop lives once again, with a whole new chapter of mayhem waiting. 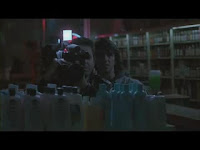 Lieutenant Sean McKinney (Robert Davi) returns as the older brother figure to one officer Kate Sullivan (Gretchen Becker), a policewoman who, later one night, gets shot into a coma by a drug-happy robber Frank Jessup. To make matters worse, two television journalist edited their footage of the robbery, making it as if Katie shot an innocent bystander ala police brutality.

As McKinney tries to clear Katie's name from the accusations, the Maniac Cop goes to work, killing off anyone who bad-mouths or shows no concern to the girl as, sappy as it sounds, he has taken an interest on Katie and that this liking kept him from ever resting into the afterlife. The bodycount rises once more, leading to, once again, a confrontation between McKinney and the now undead Cordell, in a race against time to stop a fate more horrible than death. 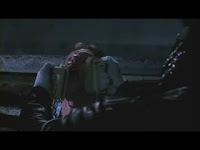 While tackling themes that are far from the first, Maniac Cop 3: Bad of Silence is an entry most overlooked and underrated, all for the fair reasons. The voodoo element thrown in is definitely an odd one; not only does it stray far from the action-horror hybriding of the first two movies, but it felt as if it's pulled from nowhere. By now, Officer Matthew Cordell succeeds into becoming a Jason Voorhees clone in his post-A New Beginning entries, coming out as an undead hulk with a strength to match ten men, pretty much like how our hockey masked juggernaut ended up in his late 80s films. Another stick in the mud is this film's weirder element of giving Cordell a love interest, which is sweet but too cheesy to make it all workable. It's probably these cliches that made William Lustig walk-out from the entry understandable; "Goodbye nameless boogeyman in blue uniform, hello distraught lover from the grave" probably wasn't a path he saw the Maniac Cop movie series would go to. 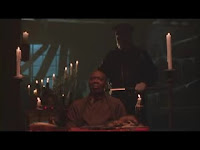 Then again, I do find these shifts of tone to be interesting in a hammy sense. As a campy B-grade entry, the film was one shred more interesting compared to the follow-up that was Maniac Cop 2. Badge of Silence as, for one, it cut off all ties from the first two, save the character Sean McKinney, and attempts to approach a narrative that's completely stable on its own while still maintaining some of the action-horror elements, even if one or two tropes didn't quite catch the Maniac Cop flavor. If I'm gonna call it anything, it's a slasher horror laced with cop drama, as most of the film concentrates on Katie's case with Cordell only present to do the vengeful murder of the not-so-innocents.

In fact, even most of Cordell's murders are more slasher oriented than action. The hospital backdrop gave an opportunity for the script to do bloodshed the old-fashioned way, with ranging medical tools turned weapons of human annihilation. I actually find this flow fair and entertaining albeit its cliches and the negative reactions of many. 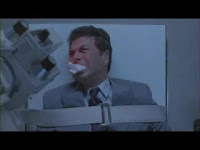 Oddly, though, despite the police procedures and the investigations, the film's horror feel is more present than the hardcore action thanks to it's voodoo and afterlife themes. The only action oriented scene I saw was that awesome fire and car stunt at the near end, when, while on fire, the shambling Maniac Cop tries to get back on McKinney and his own love interest, a physician Susan Fowler (Caitlin Dulany), driving a police cruiser on tail of their ambulance. Sadly, as strong as this piece might be, the overall ending of this film, and also the whole series, felt too anti-climatic. (And gag-worthy cheesy) 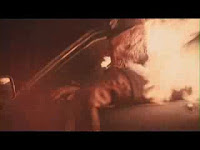 I'm sure very little will agree on this, but I find more "life" in the undead Cordell and his antics here. While nothing beats the original, and the first sequel hardly touched anything new, Maniac Cop 3's cult status, misplaced directions and notable hint of cheddar got hold of me by the cuffs. Not going as far as calling it the big bang of an ending, but at least they ended it before the series went astray.