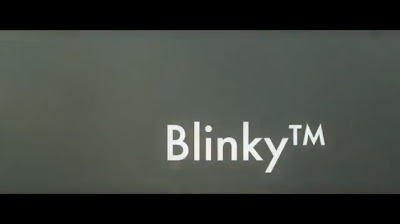 Alex is a boy who thought purchasing a Blinky (an AI servant on sale for $9,999.95!) will fix his family problems as they bicker with another everyday. Sadly, nothing much changed even then and the boy became more bitter with his new toy robot, starting to see it more as a nuisance.

However, for some unknown reason, Blinky starts to malfunction; he acts weird, looks at his masters in a creepy way, and may had done something to the family's dog. Soon, Blinky's willing to do a certain task he heard from Alex. Something about killing everyone...

While most other robot horror flicks are either an action-hybrid (The Terminator) or a psychological mind trip (Demon Seed (1977), BlinkyTM kept a simple story and brought instead a level of eeriness that's really disturbing and, in one particular scene, nauseating. By any means, making BlinkyTM a short film saved it from going downhill as the plot is good yet its very execution is fragile that anything else to exploit it might drastically change the tone of the film.

The effects were outstanding and the acting is fair, though the fights between the parents was never fully explored, making the plot a bit shallow. Nevertheless, Max Records (the kid from "Where the Wild Things Are (2009)") gave us a performance that just reflects how bad the situation was before Blinky came though one may agree that the robot itself was the real show-stealer. How Blinky began to malfunction is never fully explained, though some hints were given. It could either be the robot rampage that was flashed on the screen for a couple of seconds, or the fact that Alex abuses his robot toy by giving it confusing and contradicting orders. But it's up to the viewers to decide what it was, all that matters is that the ambiguity of this "error" riles up an effective horror in terms of unpredictability and uncertainty.

BlinkyTM, in my final words, delivers the dread. It's short and straight to the point, well-acted and supported. If it fails on the gore? Just remember, less is more. (blood splashes never looked so tame again...)