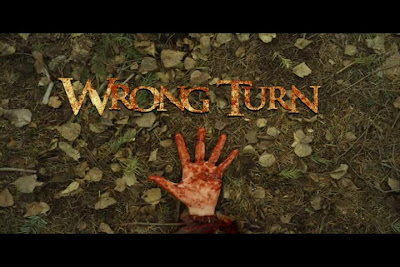 The crazy inbred cannibals are back again for more gory feasting and cheap-jack exploitative violence in this fifth entry of a franchise I never expected to go this far, once again fueling my assertion that they should have ended it with Wrong Turn 2: Dead End.

Before this entry, the Wrong Turn franchise took a jab on doing a prequel showing how the first three original cannibals got in the woods in the first place before running down the rest of the mile as your standard survival/slasher flick that we've grown familiar with. It was a hardly a satisfying prequel on its own and I guess that calls for another round of our original trio's cannibalizing adventures, this time dragging Doug Bradley (Hellraiser's Pinhead) into the foray!

A group of young partygoers drives all the way to a small town in Virginia to commemorate a makeshift Halloween celebration known as the Mountain Men Festival, wherein you have to dress up as an inbred for fun (?), party all night long and leave the town entirely deserted just for the night so you can hook up with some girl inside a police cruiser.

And then there are the three inbred cannibals, One-Eye, Saw tooth and the ever so popular Three-Finger (all of them looking the least like the incarnations of the original due to awfully cheap make-up) skulking around in the woods looking for people to kill and eat. Also with them is Doug Bradley's character Maynard Odet, who took in the brothers as his own sons (or something), teaching them how to hide their murders a lot better to avoid capture. (I pray, though, that this character wouldn't end up being the Grampa character of the first two cuz that's just sad...)

Eventually, the teens cross paths with Maynard as he poses as a hit-and-run victim in hopes of luring them closer for his boys to kill. But after Maynard's own failed attack and the teens ganging up on him to a beat-down, things further didn't go as planned in favor of the cannibal family when the cops arrive on the scene to take away Maynard and one of the teenagers after finding drugs in their car. With Maynard captured, the cannibal boys begin sabotaging the conveniently nearly empty town and kill off anybody that gets in their way from breaking their father figure out.

More or less a B-movie fare with lots of plot holes, Wrong Turn 5 takes the easy way out by providing it's audience the cheapest and, sadly, the lowest excuse of exploitative movie making that is the no-logic routine and excessive gore from then and there. Example of said no-logic escapades? The very fact that the whole town's almost deserted, thus making the place a perfect spot for murdering people with very little witnesses to boot up. Kinda cheating if you ask me, but that has nothing on the resourcefulness and creativity of our three killers, who somehow have the time to break out murder weapons like a corn thresher or even make a large cylinder trap to store an innocent man inside while piling up tins of gasoline just to have it explode moments later. Yep, it was as if God just decided to make murder easy for that night and our hillbilly maniacs took advantage of this by taking their sweet time coming up with elaborate overkills for us to watch. (Just watch that corn thresher scene or the gutting/forced self-cannibalism scene. As much as I love those scenes, they're definitely overkill)

If gore is all that matters for this movie, then I'll admit, that part's a success. Plot-wise, though, the movie's a total lost with little likable characters and paint-by-number cliches. Acting's fair, but I'll give Doug the benefit of a doubt cuz he just nailed his role as a wanted serial killer (who for some reason ended up in the woods) even if he spent most of his time behind bars and rambling on and on about how his boys are gonna get everyone. Camilla Arfwedson was also good as the sheriff, but everybody else were as disposable as the characters they play.

Just when I thought Part 3 was the lowest this series could go, this one just had to pop it's ugly rear. With no signs of improvement from the previous package, the least the movie could have done was to be entertaining in a braindead way. But unless you're a slasher fan who's completing a collection, or an avid fan of the series, it's worth a rent. Those looking for that same thrill ride the first Wrong Turn or the Second had, look elsewhere cuz that ship sailed and sank.

Bodycount:
1 female axed on the gut
1 male hunting knifed to the neck
1 male electrocuted
1 female gutted with hunting knife
1 male had his legs smashed with sledgehammers, ran over with truck
1 male buried up to his neck, head shredder through corn thresher
1 male shredded through corn thresher
1 male immolated in explosion
1 male gutted with billhook, hit by a truck
1 female shot through her head with a shotgun
Total: 10
Posted by Kaijinu at 9:31 PM