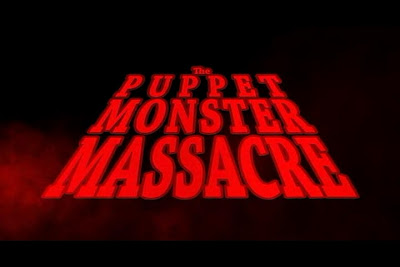 It's 1985 and a Neo-Nazi by the name of Dr. Wolfgang Wagner is plotting a revenge scheme against those who caused a tragic accident back during WWII and it involves a perfect killing machine, made from the genes of every dangerous animal there is, as well as the darkest demons of hell. The resulting abomination is a monster hellbent on devouring the lowest known life forms on earth: TEENAGERS!

We now shift our attention to Charlie, our hero whose basic description includes him being "one giant pussy" and that he has an on-and-off girlfriend Gwen who, despite knowing Charlie has no balls, still hangs out with him. He and Gwen, along with goth punk couple Iggy and Mona and overall geeky horror junkie Raimi, find themselves one day receiving a letter claiming they won a chance to inherit a million smackers if they "survive" the night inside a creepy mansion, owned none other than Dr. Wagner and his adorable penguin sidekick, Squiggums. As you may have established in the opening, this is obviously a ruse to have these kids fed to an unholy beast and it's only a matter of time before they're forced to fight back.

The Puppet Monster Massacre (2011) is a film divided by two parts, with the first being your standard slasher film with a sci-fi/monster twist as the titular puppet monster stalks and murders young nubile felt with much gory fashion never before done onscreen since Peter Jackson's Meet The Feebles (1989). It isn't long before there are only two of the casts left, one escaping and bringing in a cavalry of soldiers, eventually living up to the titular bloodshed.

The film has its ups and downs as, on the technical side, there are times when the voice acting can be a bit off, more evident with the female characters as they sound a bit sullen or flat compared to the livelier and more characterized male voices. Then there are the few moments that the audio suddenly glitches, which thankfully doesn't dent the film that much, entertainment-wise.

Some of the jokes are also a hit-or-miss, with a few running gags that personally got me chuckling, most notably one involving Raimi getting shocked by something obscured from the screen before revealing to us as nothing more than a mundane object. (a rock, a table and a tree to name a few...) Other oddities include an obscure "puppet sex" which I find both funny and weird, and the sudden tone shift from teen horror to scifi-monster-action that has countless soldiers dying at the bloody maw of the now hundred foot tall monster and an adorable penguin.

As much as obscure titles like this goes, so long as it is blessed with blood, sex and mind-numbing nonsense, it's bound to make my night livelier than it should be. The Puppet Monster Massacre (2011) got that fire burning through as a strange and artistic take on a teen horror parody. This is one devil not to be missed and recommended for those with a funny bone to spare!