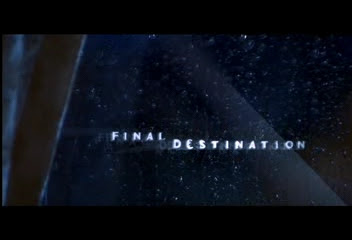 For its time, Final Destination marks the new millennium with a unique take on the dead teenager movies, one that is a "slasherless" slasher movie would be successful. I was skeptical at first, too, but somehow Death found a way to toy with our lives with much creativity and, most importantly, terror all thanks to one director, James Wong.

Just in case you, the reader, are the kind unfortunate soul who hadn't seen or heard of this film yet, Final Destination is about one 13th of May, when Alex Browning (Sawa Devon) is about to board a plane with his class for a school trip in France. He, however, is getting the feeling that something isn't right; strange song selections, wisps of wind, ominous labels marking "the end", by the time he's on board to fly,  it was too late as an engine explodes and incinerates everyone in sight, him included. But just when you think this is the end, it isn't.

We suddenly moves away towards an unblinking eye and reveals all of the deaths was no more than a premonition. Alex then starts to warn others in hysteria but only a handful of people got off. After being thrown off the plane, they see to their horror that their flight does in fact explodes, killing hundreds.
The incident turned Alex into an outcast as many parents and friends of the deceased and even some teachers felt uneasy being near him. But after a month, those who survived the crash starts to die off one by one. Alex is now convinced that Death must be trailing the loose ends to his design and must now work out its plan, preventing further accidents from happening while dodging the FBI, who begin to suspect Alex may had a thing or two to do with the deaths...

More psychological and puzzling than a slasher whodunit, Final Destination is a "howdunit" (as Vegan Voorhees calls it in his blog), with our main casts trying to figure out who will die off before the other and how.

And "how" is where the movie gets to be creative; more imaginative than Jason's "roasted sleeping bag kill", Final Destination puts Rube Goldberg's cartoony machine ideas to a more vividly and terrifying twist as everyday objects and situations are put into Death's plan. While not altogether brutal, the deaths are scary from the fact that some of it can happen in real life if you're not too careful. Simple objects can lead to one disaster isn't really that rare nowadays, as simple miscalculations can kill you, an idea so terrifying that it even scar my psyche enough to make sure I don't change the temperature of my drinking mugs so suddenly or else I'll get a damn hot shard to my neck.

Devon Sawa plays our first teen seer in the franchise as our troubled Alex Browning, who suddenly finds himself in a Hitchcokian situation where weird shit happens to ordinary folks like him. He's the very definition of a teen hero in a horror flick, lost between the real world and his own, trying to find a way to save a life not because he wants to, but because he needs to, a similar twist of fate another character he played in another supernatural slasher, Idle hands (1999). Other casts includes Kerr Smith as Carter Horton, a jerk-jock who picks on Alex for the seeming purpose of just existing in his life as well as Candyman actor Tony Todd in a more ambiguous role as William Bludworth, a coroner who knows more about death than anybody else.
At times, the film struggles on how to keep the suspense going and the audience guessing. This is when editing came into place and while it succeeds most of the time in executing the accidents, there were times it fails to be as good as the complicated death scenes. Special effects on the deaths, though majority are serviceable thanks to some nice practical effects, can get into mixed bags themselves with how they handled the cheap CGI. (But considering this is 2000, I'm willing to look over that) Despite these minor flaws, Final Destination still retains its mood and atmosphere, getting tenser and tenser until it reaches the climax, all the way down to its crazy conclusion.

Final Destination was a certified his and indeed too good to just end with one movie, later becoming a big franchise. Looking back at this original is like a quick glance on a promising start; while some of the sequels fail to beat the standard fear this film created, they are special on their own terms, just as Final Destination is held special for its unique premise, plot and an idea so big, its catastrophically good.

Bodycount:
280 passengers incinerated in an exploding plane
1 male accidentally snared and hanged himself in a bathtub
1 female run over by bus
1 female penetrated by a knife to the gut
1 male decapitated by the mouth by a flying metal shard
1 male crushed by a giant sign
Total: 285

(Note: Alex browning dies in between this film and its sequel. His death is later mentioned in the sequel, involving a freak accident with a brick to the face.)
Posted by Kaijinu at 7:52 PM