A lot of Nonsense for a haunted house: The House by the Cemetery (1980) 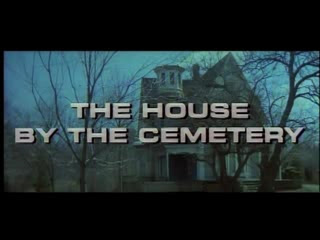 Professor Norman Boyle moves with his wife Lucy and their son Bob, from the busy life of New York City to a milder setting of a three-story house located in the Boston country side, by a cemetery.

Unknown to them, its murderous and shambling former owner Dr. Freudstein dwells in a secret location in the basement and emerges at night to murder people for their blood as a part of his grueling experiments for immortality. While Boyle searches for the house's haunting history, more murders occur and whatever is murdering these people is getting closer to his family.

Compared to the over-the-prism-of-reality cartoonish gore of his previous films such as "The Beyond" and "City of The Living Dead", House by the Cemetery carefully sets aside the high kill counts for nihilistic atmosphere and very moody set-pieces thanks to some astonishing camera works and a few moments of nail-biting tension albeit the mediocrity of some weird ideas and scenes that just doesn't work.

The "haunting" isn't as effective as Fulci hoped for however, with strange voices and weird eyes out of nowhere acting out the roles of ghostly phantoms, putting up a tedious build-up of any ghost movie heavily influenced by the likes Suspiria and The Shining only a lot goofier and littered with inconsistencies. Examples of these are the fact that our killer managed to split a woman's head open by dragging her chin down the stairs, and that one mysterious babysitter who cleans up a murder spree, only to be murdered without further explaining why or whether she knows of the ghoul whatsoever. I would shun myself to admit it but this time, logic might help shed more light to this movie or at least put some decent connections to each scenes.

Frankly, I have no trouble digesting this film despite all of this; as illogical as it is, it's still an enjoyable piece of Euro-horror with the only true beef I got with it being the awful dubbing. Giovanni Frezza as the young Bob Doyle was actually a decent kid. Curious, but well-mannered. The only butcher? They had to dub him with a voice-actress pitching her voice up to sound like an annoying shrew. Ugh.

Gore here was more in trait with the typical slasher murders such as a brutal firepoker stabbings and a (slow) knife decapitation. Funny enough, this film lacks the popular "eyeball gag" Fulci normally puts in his film but was close to having one but the man wasn't too happy on how the effects came out so he decided to cut it out entirely.

True, I find myself skimming through the fast forward button more often than not just to see the gore scenes when I'm bored, but at some unholy nights, I do find The House By The Cemetery worth a watch. Hardcore horror fans may have their mixed reaction to this, but I stand my ground on my rating and so do my admiration to Fulci.

Bodycount:
1 male found mutilated, impaled to the door with scissors
1 female knifed through head, exit to mouth
1 bat knifed to death
1 female repeatedly stabbed to death with fire poker
1 female (slowly) beheaded with knife
1 male had his throat clawed and ripped open
1 female had her head bashed open via concrete stairs
total: 7
Posted by Kaijinu at 11:59 AM