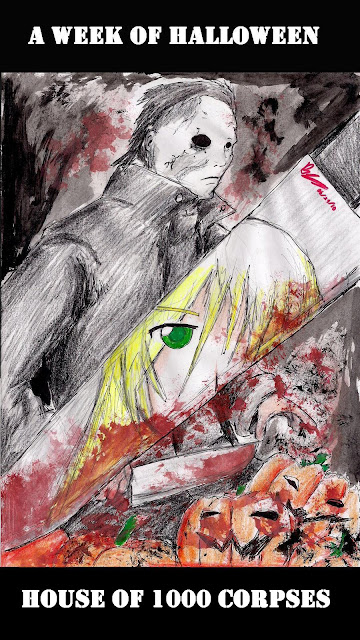 Halloween's just around the corner and for me, it's gonna be a big deal. Since no one in my country (Philippines) takes Halloween seriously ('cept the little kiddies), all I could do is watch horror flicks but I kinda do that everyday. So I might as just know a thing or two that's "Halloween" Appropriate. And not to mention that I do have this blog now means I can share some random useless stuff that you guys probably already know. 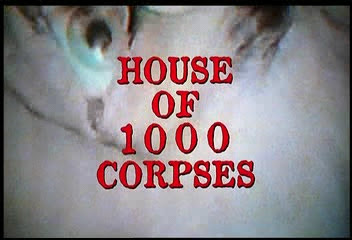 I remember all the horrors this film did to my young psyche: scalped victims, dismembered folks turned into sideshow displays, daughters forced to touch the skinned faces of their fathers; all of these were too much for a tender 11 to 12 year old me, but then I decided to see it again years later as an adult of sorts. Now I see the “art” that is Rob Zombie's debut film.

The film opens with a duo of local thugs robbing a gas stop-slash-sideshow attraction; the stop’s proprietor, a dirty old hoot who calls himself “Captain Spaulding”, bravely taunts the men with their attempt to rob them until he finally got a nerve stroked when one of the robbers mentioned he dislikes clowns. All of the sudden, a masked maniac broke in, axe at hand, and hacks one robber while Spaulding shot the other on the head. The maniac laughs at the fallen survivor until Spaulding walks to him and shoots him dead on the face. (Messing up his clown suit)

We then jump to two teen couples out in the open road during Halloween night, looking for unheard attractions and tourist traps for their book. On their journey, they ran low on gas and stop at Spaulding’s place, where the clown gives the kids a tour of his attraction, particularly that of a local legend called “Dr. Satan”, a serial killer who murdered many for his diabolical experiments and whose supposedly empty grave is claimed to be be found nearby. Hoping to add the the doctor's grave to their book, they asked Spaulding for directions and drive away.

As they rode off, they picked up a hitchhiker named “Baby” and gets a flat tire soon after. Baby’s family picks them up and shelters them for the night, giving the kids a peek on their bizarre Halloween rituals only to end with a minor fight. This escalates to a wilder and seemingly inescapable series of torture, murder and occult as “The Firefly Clan” shows them why it is not wise cross their family and those who enter their home rarely make out alive…

While I do agree with some calling this a mindless, plotless, jumbled piece of violence, profanity and forbidden sensibilities, House of 1000 Corpses is still an entertainingly dark little devil that lives up to its name and provided some good throwbacks to the 70s exploitation and over-the-top grindhouse shock.

It’s definitely made for horror fans who enjoy grit and grue as gory murders, sadistic torment lined with supernatural forces, and rock and roll aesthetic line every horror scenes in this movie, a harsh yet somewhat workable practice that may not be everybody’s tea, thus dividing viewers to either hardcore cult fans or sensible haters. Knowing this as Rob’s debut film, I personally cut this piece some slab for the dozen plot contrivances and overly frequent use of vulgarities as script, simply looking at what this film delivered instead.

With plot and characterization obviously absent, the film makes up for it with shocking and disturbing imagery done in an early 90s music video-esque editing and camera work, all focusing on the horrifying themes of shock and suffering, as well as looking into the macabre fascinations of a disturbed family in a less than structured narrative and more of a cartoonish and overtly-sadistic underground horror piece.

Of course, there’ll always gonna be superior titles who did the shlockfest throwback better, one of them being this film’s own sequel “The Devil’s Rejects”, but as a cult-hit I do warmly embrace this stabby-little backstabber. It’s one of the weirdest, most unique display of horror tropes that would disturb, shock and cringe millions, thus it’s a horror film by horror fans for horror fans.