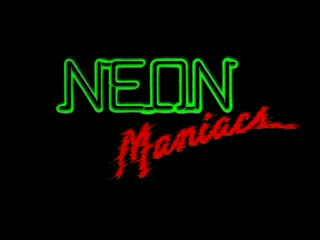 "When the world is ruled by violence and the soul of mankind fades, the children's paths shall be darkened by the shadows of the Neon Maniacs." 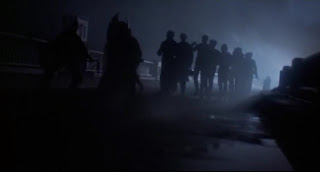 Nice quote to start a movie about twelve to thirteen monsters, each with their own theme that matches their method of killing, coming out of nowhere to raid one unsuspecting town with murder in mind. With an idea like that, how can I refuse to watch?
﻿﻿﻿﻿﻿﻿﻿﻿

Under the Golden Gate Bridge, one lonesome fisherman was just strolling home when he sees a cow's skull obscured in a corner of the path. He picks it up and sees it's attached to a parcel of trading cards(!) featuring none other than the maniacs themselves! As he browses through the deck, an axe gets buried into his noggin.

Cut to one Natalie (Leilani Sarelle), who's celebrating her birthday by tagging along some friends and partying in the woods. It isn't long before a band of leather clad monsters resembling the cenobites from the Hellraiser franchise or the freaks from Nightbreed (1990) gatecrash the celebration and starts murdering everyone save Natalie, who managed to lock herself inside a van until the police comes and took her off.

When questioned for the disappearance of her friends, Natalie tries to tell the truth as much as she can but, of course, nobody believes her tale of monsters in get-ups, much to the distress of the families and friends of those missing teens. Still, Natalie is certain that some legion of ugliness killed them and now they're after her for escaping their grasps.

All the while, a horror junkie of a fan girl, Paula (Donna Locke), goes clue hunting after hearing about Natalie's crazy story and the uncertain fates of the missing teens. She gets spotted by the freaks and marks her high on their to-kill list like Natalie, although her efforts weren't in vain as she finds out the creature's obscure weakness: water!

With Steven (Clyde Hayes), a love-lorn buddy on her side, and Paula, sharing her experience, Natalie must now face the threat again and stop the Neon Maniacs before the whole town is taken and killed.

Sadly, as much epic as the idea of twelve immortal and homicidal monsters from God knows where attacking the town's population sounded, Neon Manics (1986) suffers a lack of proper direction and instead ends up as a jumbled mess full of plot holes, barely explaining to us who or what exactly these "Neon Maniacs" are; they did establish the fact that they're hiding underneath the Golden gate Bridge, but how long have they've been lurking in there? And if they're from the some otherworldly plane where water is equivalent to acid for them, why are these monsters are so different from one another?
﻿﻿

Originally, the idea was to have at least 80 variations of the freaks, but due to rewrites and budget restrains, it was reduced to just 12, a collection consisting of an archer, an axe wielding maniac, a hangman with a noose, an ape-man, a cyborg, a native American warrior, a deformed knifer, an undead soldier, a Samurai warrior, a biker, a surgeon, a decapitating madman and a duo of one-eyed lizard men; if the band Lordi would get their idea of dressing up as different monsters as a gig from somewhere, it would be probably from these guys.
﻿﻿

But, logic isn't this film's strong point, but rather, it's the obscurity, the bizarre nature and the cheesy special effects that made this film a one-of-a-kind time cartoonish capsule to the greatest era of teen horror.

While these monster are strange, they're still pretty cool as each has their own murder weapon or theme of choice. Axe and Archer get a modest screentime killing off people with an axe and a crossbow, respectively. Another is Hangman, whose luck with the noose is shockingly effective as people are dumb enough to get close to it and get strangled or hanged. Samurai, as namesake, slices people with a samurai sword while donning an era-old armor. Mohawk's a native American with a nasty spear and tomahawk, Juice is a cyborg that electrocutes people and shoot bolts, Doc performs surgeries on his victims, Slasher is a savage deformed brute who knifes victims with a dagger, and so forth. They're silly as they are threatening, apparently existing only with the sole purpose of murdering millions.

Whatever this movie lacked for a brain-man's pleasure, it makes it up with its creative ideas and juicy killings, which is massive here! We get decapitations, hooks to the neck, lots of strangling and, my favorite one of all, a heart surgery! The monsters themselves get a nasty way to go with water, one of them gets his head being washed off as his bloody stump squirts neon blood, while another gets mercilessly bathe and melts in bathtub!

If the gory and gooey madness would enlighten fans of the blood brood, I also find this film's trio of heroes likable enough to root. Paula is one of those rare female horror junkie that's also a main character. Donna Locke is just plain adorable with her spunky role and her going toe to toe with not only against a knife wielding monster, but a duo of bumbling cops is just one of this movie's simple highlights. Clyde Hayes as Steven plays a rather gentler yet very stable boy-next-door type of fella who not only manages to keep his cool when the situation gets mofugly, but even got the guts to make love when the monsters are looming all over the school's hallways.

As silliness goes, this one's very forgivable if you're into cool monsters, nicely done special effects or just plain 80s trash. It has "cult-classic" written all over it's scaly, twisted, oozy faces and it truly deserves every bit of fun you could experience in watching this hammy flick. It was made intentionally to be fun and it should be appreciated at that. Perhaps even more as a guilty pleasure? Yes, maybe.
﻿﻿﻿﻿

Seek this one out and give it a try. Shlocky critters and deformed axe murderers await you under the neon blood!

Bodycount:
1 male hacked on the head with axe
1 male axed on the face
1 female decapitated with samurai sword
1 male sliced in half with samurai sword
1 male had a leg snapped in two, killed
1 male gets an arm lopped off with samurai sword, killed
1 female gets a crossbow shot to her back
1 female hacked in half with axe (mostly offscreen)
1 male strangled and hanged with noose, hacked with hook
2 males and 1 females missing (presumably killed)
1 male killed (method not seen)
1 male hanged with noose
1 male electrocuted by the temples
1 monster melted in a bathtub filled with water
1 male had his heart surgically removed
1 male had his neck caught with chain and dragged across the hallway, killed
1 female strangled with noose
A number of party goers presumably shot by an open fired machine gun as well as other additional killings
1 female gets a crossbow shot through her head, exits to mouth
1 male trampled
1 male had his neck slashed with scalpel
1 monster beheaded with water
1 female seen killed, sickle on the chest
1 monster hosed with water, melted
1 monster hosed with water, melted
1 monster electrocuted with running water
1 male gets a hook to the neck
Total: 28+