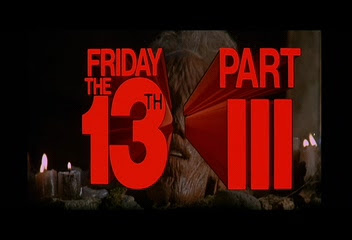 Let alone that this was shot in 3D, Friday The 13th Part 3 will always receive a mixed feeling from me; it's good, there's no doubt about that, but there's something lacking about it. Perhaps it's the absence of solid plot? Too many random scenes that just kept popping up? The fact that the characters here are unusually dumber than the last movie? Only one way to find out.

A van load of young adults head up to Crystal Lake for a weekend of God knows what reason, but it may have something to do with just lying there on the docks and smoke some pot. Assorted in this pack are one butterball who enjoys make-up effects and practical jokes, a newly pregnant girl and her boyfriend, a randomly placed Hispanic girl who wanted to get away from her overbearing mum, a hippie couple who are constantly high on pot, and, lastly, an emotionally damaged girl who has a mysterious past. We get a series of random things thrown in to live up the pack, including the usual doomsayer warning them with an eyeball and a trio of bikers who're out to steal their van's gas, all the while Jason is back, somehow surviving a chopped shoulder from his last movie and finding his way to our kid's little cabin-slash-barn. Gratuitously 3D bodycount, this way come!

The biggest problem for every film in a franchise is usually what direction should it do to follow up from the previous installment in a manner that's grander and better. With the prior Friday film establishing Jason Voorhees, the drowned boy of legends from the very first movie, somehow survived his fate and has been surviving in the woods in all these years, Part 3 opted to be simple and just kept the story going around our deformed killer through another killing spree with some obvious quirks.

The new set of thespians aren't very likable or that developed, for one. They're basically marked by numbers just to be killed off in the end, which is visibly evident when one of the film's more standout-ish character, Shelley, is a fat jokester who aspires to be "an actor" but fails to be sympathetic as he comes out pretty annoying and can be a jerk at times. And then there's the random situation concerning bikers that doesn't really do much but add more dead bodies, which again shows how the movie is simply attempting to keep the one-trick bodycounting alive and moving.

If you start to notice how shallow this movie is, as in if you begin to think this is a perfect example of a very "basic" slasher movie ever to be released, then you might be right. It has gore, nudity, dumb characters, a hulking killer, a sizable bodycount, and, for the first time for this franchise, Part 3 makes itself the first film that's obviously doused with cheese! Whether it's for the 3D or just to "lighten" it up for the waves of teenage movie goers, it kinda ruined the seriousness and grim of the first two Friday films. (Heck, don't believe me? What's with the Disco opening, then? Their just lucky I happen to like disco just so you know...)

Thankfully despite all of this being said, Part 3 is still far from the worst. Where it lacked in characterization and plotting, it does make it up with some imagination and camp value from both the 3d gimmick and the brutality of the murders. Personally, this film is the easiest Friday the 13th sequel for me to watch since it's really not that hard to follow and the pacing is decent. I always loved one kill here where a poor lad is walking in a head-stand, only to be greeted by Jason moments later and got himself split down the middle. I highlight this sequel, too, for that fact that this is the first time ole Jason gets his trademark hockey mask and that he finally gets out more considering he, in the last film, remains hidden either behind the camera or in the shadows. The mask finally gave him the freedom to move around and do all these damage in all his glory.

Steve Miner had it going for a very plain sequel that absolutely does nothing but bring the flame back to life for old Jason. Still, it was a bright future for Jason and a decent way to start raising a modern boogeyman.

bodycount:
1 male gets a cleaver to the chest
1 female stabbed on the back of the head with knitting needles
1 female impaled by the neck with pitchfork
1 male pitchforked on the gut
1 Female shot in the eye with harpoon bolt
1 Male split between the legs with a machete
1 Female impaled with knife through the chest
1 Male seen with throat cut
1 Male pushed into fuse box and electrocuted
1 Female gets a hot poker through the gut
1 Male got his head crushed until an eye popped out
1 Male hacked to death with a machete
total: 12
Posted by Kaijinu at 2:48 PM