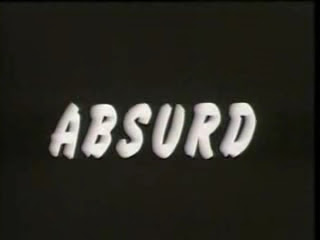 Following the success of "Halloween" and the massive cult following of his Anthropophagus (1980), comes Joe D'Amato's next slasher shock opens with a priest in pursuit of an escaped maniac he revived through genetic engineering. This scientific mishap somehow gave the feller the ability to quickly regenerate through rapid blood coagulation, though this didn't stop him from getting his guts torn out on a railed gate when he tries climbing it over, only for the priest to unknowingly pull him down into it.

Behind the gate, a family witness the scuffle and calls in the hospital after the maniac falls unconscious. There, they fixed and stitched him up, bewildered to see him healing more rapidly than they could have imagined. In the midst of this, the priest gets captured by responding law enforcers and starts getting questioned about the pursuit, thus forcing him to share the details of his absurd experiments.

It isn't long before the maniac finally recovers, gets up and starts murdering his way to the same railed-gate house, now filled with two babysitters, a young boy and his paraplegic sister, thus begins a deadly game of cat-and-mouse leading to one grueling conclusion.

While painfully unoriginal, Absurd comes to satisfy us with more gore and little creep factor, going overboard with its visceral display with close-ups on torn flesh, dismembered bodies flying here and there, and prolonged murders. It's all actually handled pretty well despite the flaws an there are some pretty tense scenes which ride on the brutality of the murders, though majority of the movie's approach aren't exactly as creepy and moody as the films it rips-off (Halloween (1978) and Halloween  II (1981)) and instead ends up being either too silly to be taken seriously or acceptable at some level.

Nothing very big to talk about this film other than it completely follows the babysitter-in-peril/home invasion slasher format religiously and the acting and scripting done here hammy to say the least. The rest of the production value is still pretty acceptable albeit cheap and gore Hounds will surely love this little murder spree. It bites a little but it's a worthwhile viewing for slasher fans alike.