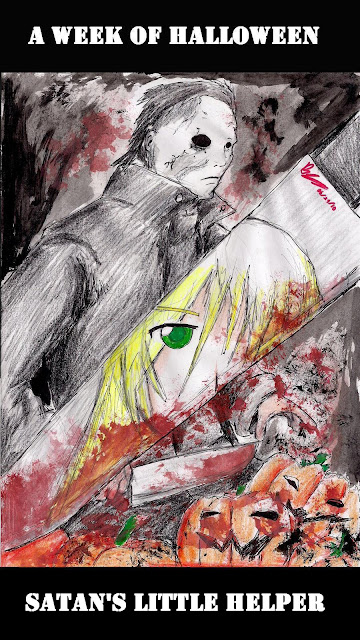 Halloween's just around the corner and for me, it's gonna be a big deal. Since no one in my country (Philippines) takes Halloween seriously ('cept the little kiddies) all I could do is watch horror flicks, but I kinda do that everyday. So I might as just know a thing or two that's "Halloween" Appropriate. And not to mention that I do have this blog now means I can share some random useless stuff that you guys probably already know. 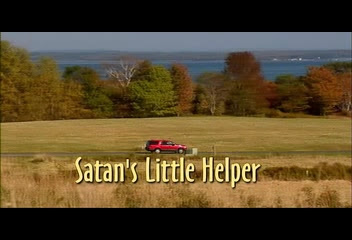 All young boy named Dougie wanted was to spend Halloween with his mum, his big sister, and "Satan". ore precisely, a video game version of Satan which he grew fond of. But when neighborhood bullies start picking on him and his sister brought home a boyfriend, Dougie's would be best-Halloween is starting to fall into ruins.

Or so until "Satan" came along; a serial killer in disguise, Dougie mistook the man as his idol and together, they start a mischievous (and murderous) journey as Halloween night becomes their oyster. But how long will the charade run before things go out of hand and by then, will it be too late to stop "Satan"?

Perhaps a better effort of merging dark comedy and slasher theatrics altogether, Satan's Little Helper makes fun of us by giving us a barrage of dumb-butt characters who have zero IQs and a gullibility that's beyond believable, and pokes fun on political correctness and tackled a lot of taboos, such as poisoning children, endangering pregnant women, some home invasion (though, in here, he was more "invited" than invading), some death to elderly folks and even religious imagery.

At times, the funny works and the mayhem is shocking as ever despite it's low budget. They even provide us a cleverly devilish and simple psycho who's as mysterious and silent as Micheal Myers and as playful as Chucky. For short, Satan's Little Helper deserved it's Cult status, but not without it's own set of faults.

While the first half concentrates on the "adventures" Dougie had with "Satan", the second half starts when "Satan" over do his murdering spree and killed Dougie's dad, right in front of the whole family; it was then they knew he's a maniac on the loose and they try everything to corner him and stop him. While it does feature some funny moments, the second part's not as lively as the first when the jokes rarely work and the whole mood kinda changed. Still, Satan's little helper's not a bad film, just a little guilty of script issues, one-sided characters (especially the kid, whose constant dumb glee irritates me to the very day), some plot holes (Like the unusual feat that one ordinary man managed to kill off every law enforcers in town), and the budget blocks it from being any better. Plus the ending felt like a cheat, but somewhat acceptable in the sense that you'll take anything just to end it. (but honestly, they could had done better...)

As a black comedy, Satan's Little Helper has the heart and joy of Halloween, making it a good impression as a holiday movie. It starts to lose this black comic touch slightly by the end but the overall results? One worthy Halloween flick