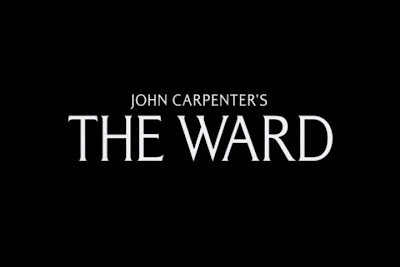 The Ward is John Carpenter’s return to horror and I’m happy to see that all’s not lost after a disturbingly sad series of dull flicks he directed for the latter years. Being the mind behind the "Messiah" of slasher flicks, Halloween (1978), I'm with full respect for his style and determination to keep us entertained, so when The Ward came out, I just had to see it.

Runaway Kristen was captured by the police and thrown to North Bend Psychiatric Hospital after she burns down a farmhouse. There, she met Dr. Gerald Stringer who is in charge of treating her along with the other inmates Emily, Sarah, Zoey, and Iris. With unorthodox experimental procedures and unlisted pills as treatments, the girls believed it couldn't get any worse when it just so happens something else is lurking the empty halls at night. Something more evil and deadly. Could this be a maniac on the loose? Or something else?

It sad to see something so easy and mediocre like this coming from the master as a lot of influencing was made here, to the point the cliches are too obvious to be anything but sour. If there's anyway thinning it down, you could say The Ward is a bit of like The Sixth Sense meets Haute Tension as it deals with a murderous ghost and an unexpected twist that, in a way, was ingenious but underwhelming nonetheless.

But it's not all that bad; production of this movie looks very slick and the casts are well acted (Amber Heard, you're my new Gemma Ward!), there are also some successful jump scares, and the murders are brutal at a point that they're simple yet nasty. The story, too, is engaging at a level but it is formulaic as it appears to drag around on the ghost story premises formulaic at day, while the murders and the stalking happens at night. Entertainment wise it's acceptable, just nothing of the new.

The last best film John Carpenter ever directed for me will always be “In The Mouth of madness”; It's socially satirical and mind-numbingly scary, a feat that's rarely done by most and is often overlooked by so called "critics". The Ward, lacking any of this, may be a sad excuse for a comeback but I'm open to wait for Carpenter to fully get his grip again, just as Wes did with his Scream 4.

Bodycount:
1 female strangled
1 female gets a lobotomy needle to eye socket, pierced her brain
1 female had her head fried with electroshock machine
1 female suffocated in a pillow case (flashback)
1 female gets a throat cut with scalpel
1 female killed offscreen
total: 6
Posted by Kaijinu at 11:42 AM