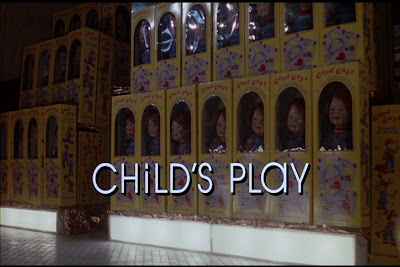 As my 100th review, I choose to cover Child's Play since it had much of an effect to me as a kid for being one of the few movies to genuinely frighten me.

One day in 1988, mortally wounded and chased by Detective Mike Norris (Chris Sarandon), Charles Lee Ray (Brad Dourif), AKA "The Lakeshore Strangler", hides inside a toy store and uses a voodoo ritual to transfer his soul into one of the "Good Guy" dolls on display in order to avoid dying completely. After a freak lightning surge, Norris later finds Ray dead from the gun wounds.

Later that morning, young six-year old Andy Barclay (Alex Vincent) celebrates his birthday with his widowed mother Karen (Catherine Hicks). A big fan of a Good Guy TV show, he later asks for a Good Guy Doll present and, though unable to afford one with her job at a mall's jewelry desk, she was lucky enough to get one when her workmate, Maggie (Dinah Manoff), tells her that a peddler nearby was selling a 'Good Guy' cheap. She got the doll for Andy, which introduced itself as Chucky, and the boy delightedly made friends with it.

Forced to work late for leaving her spot, Maggie decided to help her friend out further by babysitting Andy later that night. All went for the worse, however, when she is attacked by an unseen assailant with a hammer, sending her pummeling out and down the apartment kitchen window. Karen returns to see this in horror and, as luck brought it, Detective Norris is sent to investigate the accident. Upon questioning Andy, the boy insists that Chucky is alive and may had killed Maggie; Karen doesn't believe this, as do Detective Norris who suspects Andy might be responsible.

When Andy is later found at another accident that ended up killing a person, Karen was called in and was adised by Norris to have the boy sent to a psychiatric ward, believing he might be held responsible for these murders or that he's mentally unhealthy. Grief-stricken, Karen later discovers that night that Andy was telling the truth after discovering that the batteries in the Good Guy doll box were never put inside the doll and, after threatening to throw him in the fireplace, Chucky came to life and attacks her before escaping.

Now in a race against time, Karen have no choice but to find Norris (who later discovers that Chucky is indeed alive the hard way) and get to Andy before the doll does, who now have something else sinister in mind for the boy.

The whole premise of the film is, honestly, in B-movie territory; the subplot of a serial killer transferring his soul to a doll via voodoo is not only unique but also too weird and over-the-top for a mainstream horror. But amazingly, the movie's script and flow was well-handled and good direction saved this from being an utter trash, giving horror fans alike something new and utterly terrifying at the same time.

Child horror is not new but none as came as close as a slasher film which involves kids as the killer's main target for its time, save for another slasher film released in the same year, Clownhouse (1988). Playing our boy in peril was Alex Vincent; his performance as Andy came out amateurish at times but granted he's only seven, I guess we could cut him some slack especially.

The film's higher power, however, lies on Chucky, the most decent killer doll on cinema so far by means of cult standing and mass acceptance. Killer dolls aren't new for its time either, not after films like Stuart Gordon's "Dolls" or the "Amelia" segment of "Trilogy of Terror", but none of them either took the approach more faithful to that of a slasher film than this movie. Brad Dourif lends his pitched yet devilish voice to our star killer, a voice that staples the doll's performance just as effective as Freddy's shrill glove-scratching-over-metal-walls, Jason's call sign, or even Micheal's head-tilting; he's the film's main attraction and he kept it at that as much as possible with the movie's scene-stealing special-effects.

Of course, the billing of making Child's Play a killer doll movie is also it's weakness; the original concept was that Andy would be suspected as our killer much longer than that of the film, making it a suspense thriller where Karen's parental position is put to the test whether her son was committing all of these murders or was it really the doll all the time. Personally, I would had liked it more if it had taken this direction, but Child's Play ends up selling out to special effects and puts the doll in the center of it all. (Sadly, the original plot is later used in Kevin Tenney's horrid Pinocchio's Revenge. Oh why does the Universe hates me so much?!) With Chucky's possession no longer a mystery, that's one less source of suspense that would have made this horror flick more fun. Adding the fact that Chucky might also be considered as a parody over the "man of steel" trope that every slasher villain seemingly possess doesn't help uplifting this flick in terms of innovation either.

Looking over this "would-be"s, Child's Play is still a nicely assembled film that's just as good as the first time you see it over the hundredth. The urban landscape gave a grittier mood and atmosphere that shadows the fragile world of a perfect family or the struggles of maintaining one. The concrete labyrinth of building, whether in or outside one, also provided some great chase scenes and, while avoiding clashing with the usual slasher cliches in teen-kill-a-thons, the murders are just as dark and shocking.

Child's Play runs as a great rehash of the overly familiar build-up, throwing out the sleaze and the over-the-top explosive violence and splatter, and made a simple, clever and most importantly, scary entry to the nearly dying slasher films of those years. Simple innovation proves to be the savior of this film, something that's tackle by most today, but only a few managed to perfect it.

Silly, outrageous and very far-fetched, but dark enough to keep the chills and thrills going. Nothing but the greatest childhood nightmare to haunt us.

bodycount:
1 male bled to death from gunshot (body only)
1 female hammered on the head, pummels out the window and falls to her death
1 male immolated by a gas explosion
1 male had his limbs broken and knifed on the chest via voodoo doll
1 male had his head fried with an electroshock apparatus
total: 5
Posted by Kaijinu at 4:23 PM