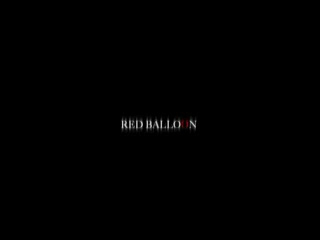 (Big thanks to Maynard Morrissey's review of the film in his blog " HORROR MOVIE DIARY" Without it, I wouldn't managed to get a quick lookie-look of this in Youtube! Thanks, mon!)

A young babysitter is stuck one rainy night looking after young Dorothy, a girl who is frequently getting nightmares. When she calls Dorothy's mum to check up if there is anything to know about the girl (Night terrors, medications, anything in between) she then realizes it's not Dorothy who has a problem, it's the girl's room...

Based on a popular urban legend, Red Balloon took a well-paced approach to this story with enough tension and jump scares to keep us entertained and intensely following what could be wrong with the situation. And for a two-cast act (three if including our masked killer), the end result is a fluid and atmospheric short flick.

The twist ending was shocking and a test of one's sharpness as clues of the killer's identity (though, not wholly) is literally placed right under our noses. We never get a good look on what our killer looked like other than the fact that our loon wears an animal mask, but even that's enough to make our monster scary. More is less as they say and this one took the whole cake.

Writers/directors Damien Mace and Alexis Wajsbrot made an outstanding horror piece that's not only terrifying, but visually beautiful and breath-taking. They really know what makes horror tick and they even managed to squeeze it all in 13 minutes.