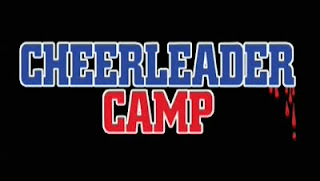 Cheerleader Camp is one title that does the cheerleading and slashing simultaneously like a coming-of-age teen comedy with a killcount, straight down to every dead teenager cliches on the book!

Alison Wentworth (Betsy Russell) is haunted by bad dreams involving parental issues and killer pom-poms that slashes her to ribbons. One would say she may have a fear of cheerleading which is kinda ironic since she's part of the Lindo Valley squad. As she and her group arrives at a cheerleader camp located deep into the woods (for some reason) to practice for the district finals, the girls of the squad are in it for the win while the dudes are in it for the sexy cheerleader skin.

Things go on as scheduled until one gal is found dead with Alison! Luckily for her they dismiss this as a suicide, but Alison can't shake off the fact that she might be responsible for her death. One by one, team members disappear by means of dismemberment, garden shears to the head, and a squishy disembowelment through a scythe, questioning whether Alison's mental condition is responsible for all of this or there a killer in Camp HURRAH! (No really, they called the place that...)

Badly acted and incredibly cheesy, one might wonder what saved Cheerleader Camp from the oblivious fate of being trashed. Well, I may point out the fact that some of the obscure moments provided some hit-and-miss chuckles, like the very idea of a summer camp for cheer leading itself which is more fitting on a teen sex comedy. The first third of the run was in fact like one, a sleaze-soaked titillating teen-comic until the first dead body comes along and Alison's drama starts to reveal this film's horror film antics. It shifts to a rather darker direction, some really brutal and gory murders, and a downbeat ending that reminds me of "The Dorm that Dripped Blood". That really caught me off-guard in a very good way, but looking at the film as a whole, I can't really point out anything special out of this.

It's not the best kind of slasher film title I would recommend to everyone, honestly speaking; It's gory, moody even, but it just didn't try too hard to do much of an impact for itself. Then again, if you're making a slasher film in that part of the late 80s, you're pretty well stuck with nothing but recycle. So if bad movies are your gig then give this a whirl. It ain't pretty, but it'll do.

Bodycount:
1 female killed by killer pompoms (dream)
1 female found bled to death from wrist slits
1 female stabbed through the head with garden shears, exits to mouth
1 female slashed to death by killer pompoms (dream)
1 female crushed against a tree by a van
1 female gets a meat cleaver to the back
1 male gutted with scythe
1 male had his face crushed with bear trap
1 male repeatedly shot
1 female seen strangled with phone cord
1 male shot on the chest
Total: 11
Posted by Kaijinu at 1:04 PM