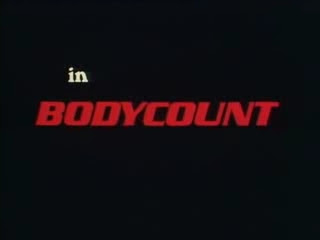 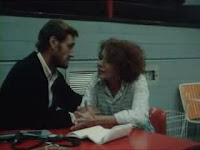 After the long run of short-lived cannibal flicks in Italy, director Ruggero Deodato of the Cannibal Holocaust fame tried his hands on another increasingly popular shlockfest spreading around the world like a plague: slasher films! The problem was it's 1986 and most slasher ideas have been tackled and recycled over and over again that there's hardly anything surprising or shocking to deliver, so he resolve to one solution that many have done: Rip-off!

We begin, after an opening theme that sounds like a mix of Friday the 13th's and Halloween's, with a teen redhead asking her dad if she could skip basketball practice to make out with her boyfriend deep into the woods. With her father approving this (?!), the girl and her boyfriend are soon knifed to death by someone with a unusual looking face and a talent to dress up in the clothing of the people they just murdered. All the while, a young boy witness the whole thing and you could pretty much guess where this is going. 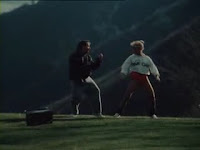 Jumping fifteen years later, a bunch of annoying teens in an RV visits the same campgrounds for the usual hiking adventure, motorbike rides, and various sexual shenanigans. Little do they know, the Shaman is still around to kill them one by one. You know, the usual teen gets killed routine.

While many directors would try something to set their films apart from the other, Bodycount rarely tried to be different. Instead, it gotten itself in a disposition of being a laugh-mock of every slasher cliches, all the while remaining to be entertaining. 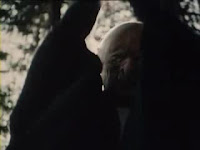 Our killer, the so-called Shaman for one, not only mastered the art of dress up but also ninja tactics by appearing in the nick of time to startle people to their deaths. Might have something to do with him being supernatural as the characters claim, but the film appears to be hinting it might actually be human. Some red herrings were even tossed in to add some mystery to the killer's possible identity including a bicker couple, the camp-hating father of a murdered girl and possibly even one of the teenagers. But barely of those add up, so we still have this odd-looking feller to ponder about.

Acting is unintentionally laughable, though the characterization of the cast as loud and obnoxious kids with nothing but sex and dumbest decisions filling up their noggins every now and then meant it's hard to really care what happen to them. One main point of a slasher movie is to feel scared for the victims and these guys are barely worth it, unless you are in it for the kills alone. Should that be the case, then this movie have another treat for you. 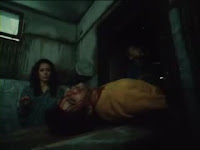 While the cast are disposable and the story lacks any of that creative juice, the murders are decent enough to watch. They're nothing too gory but it hits right on the mark on being acceptable with its decent build up and some tone. Though some lighting issues may come in between but it's mostly okay for my take.

If mindless fun is what you yearn for, then visit the Shaman's woods in this little backwoods horror film. Don't expect too much, though, cuz it's not.