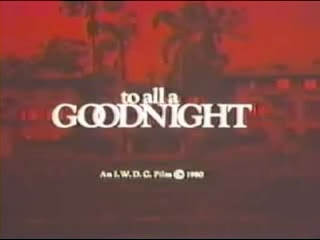 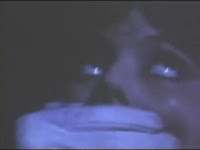 First, as of writing this, I like to pay my condolences to one David Hess, who passed away last October 8, 2011 at the age of 75. While most of us will remember him for his nightmarish role as the notorious thug/rapist Krug in Wes Craven's and Sean Cuningham's debut film "Last House on the Left", we will be looking in here his directorial debut, a slasher by the title of To All a Good Night which, as much as I wanna pay good respect to the man, isn't without it's own sets of shortcomings. 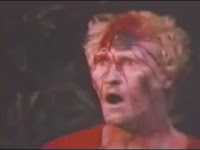 The story's far from anything original. More like watching a holiday-themed re-envisioning of Friday the 13th, complete with a "must avenge dead kid from prank and/or initiation gone wrong" motivation for the killer's murder spree, ill-fated doomsayers, synthesizer scores, and some easy paint-by-number murder spree of some kids who just wanna have fun for Christmas break.

Unfortunately, the holiday theme in this one isn't that well felt for the set of the movie looked too "hot" to be anywhere Christmassy. (They could at least put some fake snow around it. Either that or the quality of the movie I got is pure VHS transfer and the color just fades away) and there is a bit of dialogue, acting, and an all too familar direction that were clearly printed on cheesy fromage to go through. A charm that may or may not work with every slasher fanatics. Hess also seems to really want to make something special out of his turn in the directorial chair and I guess that includes giving us the most unlikable set of girls and dates this side of all murderous and weird have ever seen. I bet he was thinking "oh, the splatter fans wanted kills! Let's make the cast so unbearable that they wanted the dead! That way they won't feel so sorry for them!"

True enough, though, the killings were the only good thing about this movie with its wide array of murders, apparently showing ole Kris Kringle here had gone a little creative with his presents, ranging from a cross bow to a battle axe. (complete with full suit of armor!) Would had worked...if we can see clearly what they were doing to these kids in the dark. Well, to be fair, we do see it, just a tad grainy is all. 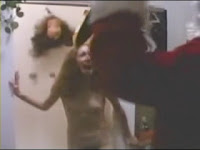 Cheese enthusiasts would likely find some guilty pleasure from this, and so goes to hardcore slasher collectors and probably to David Hess cult followers and fanatics, too. Otherwise, if you're after some decent Christmas slasher, I suggest you look elsewhere. Perhaps a deranged killer Snowman named Jack Frost might interest your cheesy needs?

Bodycount:
1 female falls off a balcony
1 male stabbed offscreen with switchblade
1 female gets a switchblade to the chest
1 female had a throat cut with kitchen knife
1 male had his head crushed with rock
1 male shot on the head with a crossbow
1 female beheaded with battle axe
1 male found with a gaping hole on his forehead
1 male had his head split open with axe
1 male knifed on the back
1 male hung and garroted with thin wire noose
1 male and 1 female shredded to bits by airplane propeller
1 female pushed to her death off a balcony
1 male shot on the back with a crossbow
Total: 15
Posted by Kaijinu at 8:41 PM