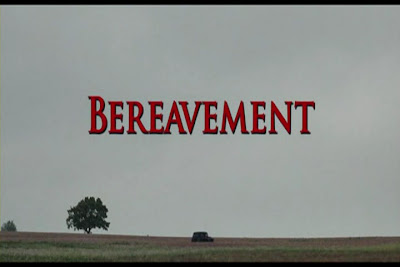 Though I wouldn't consider myself a big fan of the 2004 direct-to-video chiller Malevolence, a throwback of sorts to the simpler, tone and character-driven slashers of the early 70s/80s, I do understand its decent fan following seeing how effective it is on recapturing the feel and look of a vintage slasher despite the lack of gory grandeur or messy exploitation. So seeing this decent fan reaction, I guess it shouldn't come as a surprise we have this prequel detailing the life and times of our killer from Malevolence before he wore the mask.

The first half of Bereavement jumps back and forth between two focus characters, one being young Martin Bristol, a kidnapped child taken under the wing of a serial killer named Graham Sutter who have been targeting and murdering young women as offerings to a Scythe wielding figure he is deathly afraid of. (And possibly just a product of his own broken psyche) The other character is Alison, a young orphaned teenager moving in with her uncle's family, adjusting to her new life in the process and even finding a new lover who her uncle isn't that fond of, all in the same town where Graham's committing his crimes.

The Martin and Alison's paths get entwined one day when Alison sees Martin inside a slaughterhouse and, upon following the boy, gets captured by Graham. When she fails to return home, her second family and her boyfriend decided to look for her, only to meet a grisly end on Sutter's hand one by one. It's only a matter of time before he finishes off what is left of Alison's loved ones, but what does this all mean from Martin's point of view?

While you can see the ending from far away, Bereavement sports a jagged raw edge that's missing from the first installment. Though the first's sluggish pacing is still present, dragging us to its prolonged family drama-meets-coming of age elements that stomped a few scenes dead and felt unnecessary at times, the film thankfully provides us more complex and intriguing horror elements that it's worth sitting through until the fiery climax, giving us the same grim and sullen atmosphere that the first film is best known for.

A lot more thought was certainly put through this one, making it more of a psychological character study as it details a psychopath's work and the things he's willing to do to make his prodigy just as "successful" as he is. There are no twists or shock scares, just a brooding horror flick that tries to amp itself a bit from its "parent" movie and, to simply put, do what a prequel film does: explain in cold patience the horror Graham Sutter suffers from and how he throws this mentality at his kidnapped victim, going as far as cutting the boy's cheek and pinning the boy's hand to the table with a knife (!) to make a point, all the while getting an unpleasant feeling every time said child victim appears on screen as we see Martin slowly transform from a scared little boy to a hardened killer at a young age.

Still a slow-burner, but at least a decently crafted psycho-thriller at that, Bereavement is a step up in some places but it definitely still has a long way to go when it comes to decent editing or dishing out a better set of murders. Still, for what it is, the movie fails to be boring and can actually be creepy, as well as distressing to watch, something that can be seen as a good thing for an effective slasher.