Deliverance Delinquents: While She was Out (2008) 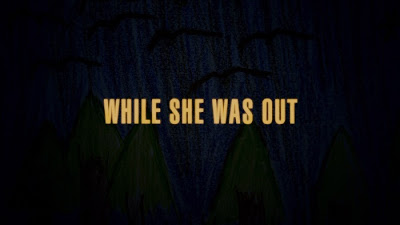 It's ultimately a love-it-or-hate-it film, but I definitely will keep this one. Nothing says Christmas Eve than painting the woods red, Tool box style. 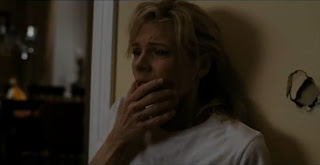 What does a single mother do in Christmas Eve? Stay home, read Christmas propaganda books to her kids, make final preparations for the big day, smile at her hubby while saying "Yes, hun. Okay, hun. Whatever you say, hun"?

No, Della lives with her twin children and a foul-mouthed husband in a quite cul-de-sac suburbs. She rarely talks back, but this one Christmas eve night, after going out for some wrapping paper, Della is forced to do something much worse than answer back. She has to survive. 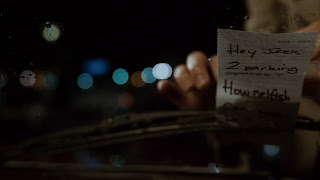 After insulting the owner of an old car that took two parking spaces, she got herself the attention of four teenage punks who're threatens her and soon murders a security guard. Fleeing and fearing, Della enters a nearby woods and get stalked and chased by the gang who're now out to kill the only witness of their crime. But they'll soon find out that everyone has a breaking point, and Della reached hers sooner than they think...

At first, I thought of nothing of this film until I took a gander at the suspiciously "bodycount" worthy plot. Turns out While She was out is a quick-paced yet thrilling look at somebody who just got out of their comfort zone and into the untamed reality. The story didn't do much other than try to make a good movie out from a potential stalking scene; it had no real plot, no other purpose but to entertain us with just a simple survival thriller about a suburban woman put into a night she didn't expect to come yet faces and learn from it nonetheless. It's pure 70s drive-in element, and that, folks, I learn to like. 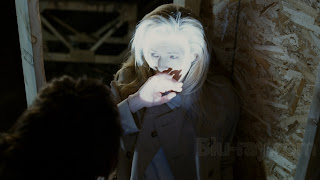 I'm no fan of Kim Basinger so I'm not giving this film stars for any big names. I'm not even going to rant about acting cuz, by far as I'm concerned, it's either laughable, annoying or dull. (No, making your four hoodlums multi-racial doesn't help either...just make the villains look funny) Not even going to criticize the closet space logic here like how a gun can go off without anybody else noticing it? Or how a shot man can go unnoticed and left to die until 60 minutes later? No, I watch movie to be entertained, not see if a 40 year old actress still got it, or learn whether it's possible to impale a guy's nose with a tire iron.

All this, I can overlook with what matters the most here: thrilling chases, suspiciously feminist roars that obviously points out that not every woman will remain a victim forever, some bloody good kills to go with that, and a satisfying ending. While She Was Out is a decent, if not engaging, independent thriller that hits me just right where I want it. Simple, Fast, bloody.

Bodycount:
1 male shot twice in the head
1 male had his back stomped on and his neck broken on fall
1 male had his face beaten and impaled with a tire iron
1 male gets a screwdriver forced through head, exits to mouth
1 male shot on the chest
1 male presumably shot
Total: 6