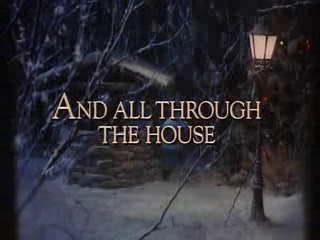 My most favorite "Tales From The Crypt" episode and the only one who is daring enough to pack all three main essence of the comic books: Scares, Suspense and Laughs!

Directed by Robert Zemeckis, this Holiday episode features a greedy woman's Christmas night where she murders her hubby to collect his life insurance. This proved to be harder to be done that night as a lunatic in a Santa suit is loose on the streets and has made his way over her home to spread some holiday fear. 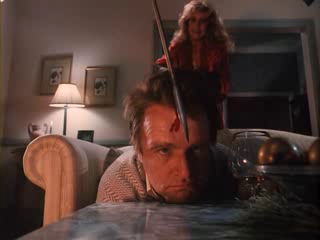 This episode proves to be warmly welcomed by fans old and new like a cozy fireplace and its best remembered for it's tightening and frightening intensity as well as some nice twists along the way. What I like about here is that all the characters think and sticks with their roles. Mary Ellen Trainor does a magnificent role as our "bad character", whose greed and sleaze immediately marks her for the taking. It's her twisted evil that makes her ordeal fun to watch and her sly creativity that left me chuckling, but she's not the best thing about this episode. Rather, it's that the killer Santa.. 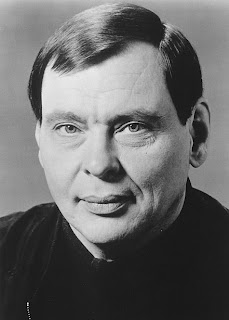 is Larry Drake.
That's right, Ole Bubba Ritter from Dark Night Of The Scarecrow, Darkman's Robert Durant and Dr. Giggles himself! Playing our killer Santa with grittiness and maniacal rawness that he's cartoonishly scary in all the good ways! One thing I learned from comic book adaptations is that it has to have both something  familiar and something new, be faithful to the origins while adding some personal tastes, and this killer is that very package.
And true to its comic book origin, the story also has its shares of laughs too. My fave scene is when the wife suddenly realizes that she can get away with a clean slate by blaming the murder on "Santa". After hacking her hubby's corpse and faking a 'terrified" call, acting turns to panicking as she realizes her dear killer's not all that dead yet! It's one of those "OH-FUCK-(facepalm)!" moments that makes you feel alright watching it cuz you know it's all for good fun.
I find this an essential seasonal watch for my holiday needs; comic book morals meet ghoulish delights, I'll tell you, All Through The House one got it all right. One of the best episode Tales From The Crypt Evah!

(Trivia: Hubby looked familiar? should be, Freddy towel-slapped his arse in A Nightmare on Elm street part 2, Freddy's Revenge!)

bodycount:
1 male hacked and beaten on the head with fire poker
1 female hacked offscreen with axe (implied)
total: 2
Posted by Kaijinu at 7:44 PM