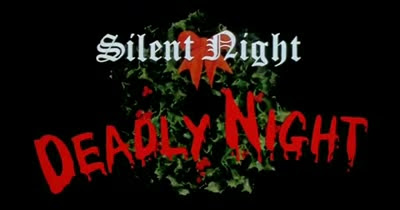 Funny thing this movie got a notorious cult status due to it being a "Santa Slasher". Well, couldn't blame the angry moms as Silent Night, Deadly Night is pretty darn mean-spirited compared to the first Santa Slasher, Christmas Evil/You Better Watch Out. Whilst the warmth and tenderness of the latter film is completely lost in this 80s Christmas treat, I couldn't see it as a bad thing, of course.

Young Billy Chapman went to visit ole' grampa one Christmas eve during his childhood, with his mum, dad and one baby brother. Turns out, Grampa's a scrooge of an old coot and he scares the shit out of little Billy, saying Santa punishes bad kids. The moment they decide to go home, luck ran out on them as they come across a homicidal Santa, who successfully shot Billy's dad on the head while driving away from the Sick Nick and murder-rapes Ma right in front of Billy, who scampered away into safety.

Well, safety for now; fast forward to 1974, Billy moved to an orphanage headed by one Mother Superior, whose idea of punishment involves belting anyone regardless of age and gender. Hence, traumatizing Billy even further and leaving me with the idea of never to trust a nun aged 40 above.

So, fast forward again ten years later, Billy grew up to be a nice, sturdy lad, who actually isn't too bad looking and is very helpful. His one vital flaw? He's still afraid of Santa and with Christmas being around the corner again and after the department store Santa ran out from the toy store he's working in, he is forced to dress up as the Holly Jolly Fat Man with the beard. And cue unraveling psychosis and murder spree.

Made notorious with it's heartless depiction of Saint Nick with an axe, Silent Night, Deadly Night still has a good run as an effectively simple run-in-the-mill slasher movie who does away the holidays with its own set of charms. Billy's decades of childhood traumas are interesting to watch and kept with a good pace and a few shock moments. By the time Billy matured enough to stand 6 feet tall, it gotten a little sleazy and a little cheesy, with ole Billy uttering out his coda being Santa and punishing anyone he catches doing something "Naughty". (Like two lovers in a tryst and a local bully) It made quite a stir among the good folks who tried to ban this film for showing near the festive seasons, but we all know it got to do what it meant to do. (And let's all face the light, the more you try to ban it, the more people will come to see it. It's Marketing, ho, deal with it!)

Even if it's more thought through than the rest of its kin, I can't help the feeling it forgot a few things. It would had done better fleshing out it characters if they are properly acted, or if they provided a longer running time (Well, they are covering three parts of our killer's life, I think time would have been our buddy). But in a standard B-movie slasher kind of entertainment, it's more forgivable than not if it gave us a good run to a familiar genre while bringing us the taste of the holidays in a brand new, and darker, light.

Bodycount:
1 male shot to death
1 male shot on the head
1 female had her throat cut with switchblade
1 male had his side slashed with knife (dream)
1 male strangled with Christmas lights
1 female gutted with stanley knife
1 male gets a hammerclaw to the head
1 female shot through the chest with arrow
1 female impaled to mounted deer antlers
1 male thrown off a window, falls to his death
1 male decapitated with axe
1 male accidentally shot dead with rifle
1 male axed on the chest
1 male gunned down