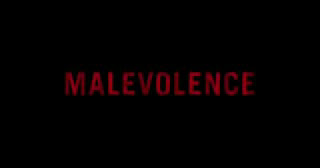 A gang of bank robbers find themselves in a dire situation when one of them gets fatally shot and another seemingly runs away with the money. Now under pursuit of the cops, the remaining criminals hijack a car and hold its occupants, a mother and her daughter, hostage in an abandoned cabin in the middle of a nearby woods as they plot what to do next. Things, however, will take a turn for the worse when one of their hostages escapes and finds refuge at a nearby slaughterhouse which, unknown to her, is the dwelling place of a psychopath who will soon be made aware that there are people nearby for him to kill.

Instead of bombarding its story with cheese, shocking kills and annoyingly dumb victims, Malevolence's focus was more on establishing build-up and atmosphere, kinda like a homage to early 70s/80s bodycounters that often try working their attention within characters before dishing out the killer and the massacre that often follows. This is in some way made evident with not only the direction and characterization Malevolence done for its plot, but you can also see it in the movie's use of grainy yet picturesque film quality, a lot of Halloween (1978) inspired cinematography and even some Mario Bava/ Dario Argento inspired colored lighting.

For this attempt to recapture the golden days of simple slasher movies, Malevolence is near spot-on and benefits further from the decent acting of its no-name casts, but there is one issue that divided my feel for the film and it is pacing. The reason for this is that while the bank-robbery-gone-wrong-meets-psycho-slasher is a relatively ingenious story for some, this wasn't my first rodeo as I already saw Scarecrows (1988) and The Cottage (2006) before this, both being slasher titles with a similar premise albeit different in style, tone and goriness. So seeing this kind of plot stripped nearly to the bone with little meat hanging, I find Malevolence kinda predictable at some parts and for a tension driven slasher, this meant it can get a tad tedious. Thankfully, the rest of the film works well with the creeper pace, particularly involving people going through the isolated houses, may it be the robbers, the kidnapped family, or even the killer himself.

And speaking of the maniac, the killer here is what I can best describe as a tribute to bagheaded killers like the ones at The Night Brings Charlie (1990), The Town that Dreaded Sundown (1976) and even the first Friday the 13th sequel. Though not overly impressive, what he offers in turn is a creep factor that strikes on the fact that whenever he is in the scene to attack a victim, there's a sense of realism to its brutality despite the lack of a higher kill count or creativity. He also has an origin that doubles as this film's twist reveal, which is unfortunately handled messily here for how expositionary it is (in vein of Psycho (1960) just to give a hint), but thankfully explored way better in this film's 2011 prequel.

Malevolence has a lot of strengths which, for some, might also be its own double edge blade; the film can be an ingenious and original take on a slasher film that just goes to show it can work without exploitative elements, but for some who prefers their bodycounting trashy, loud and messy, this can be a chore of a movie to watch. Still, as a slasher, it did something rather daring for its time when blood and guts are making a comeback thanks to SAW (2003) and the 2003 Texas Chainsaw Massacre remake; it personally took a while for me to appreciate its attempts but in the end, I am appreciative of its efforts.

Worth a rent or a keep depending on your taste. 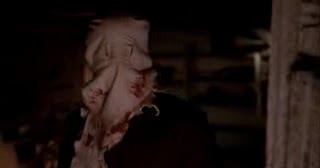