On The Twelfth Day of Christmas, Santa Was Given to me~: Don't Open Till Christmas (1984) 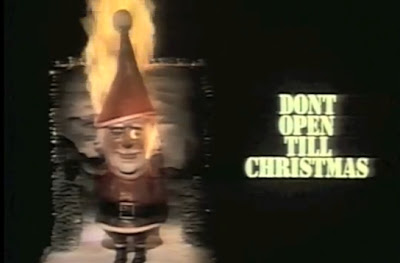 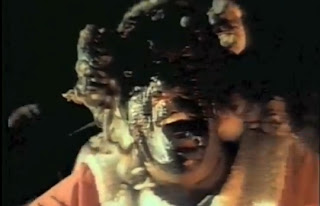 Some loony in a plastic mask and hoodie is out for blood. Santa's blood to be more precise as anybody wearing the red suit and hat are sitting ducks for the killer. To the rescue is Inspector Harris, looking for the psychopath responsible but is quickly getting his hands full as more murders pile up in grisly fashion. Who is this killer and what caused him to go cuckoo everytime he sees Santa? And what's up with that journalist?

Yes, if you're gonna narrate this story in a nutshell, it's probably just that. Nothing more clever than a bunch of cops trying to figure out who's killing all the Santas and it's probably a lot dumber at that. The premises of the film is indeed creative, rather than the standard killer Santa Holiday flickie, we get a killer-out-for-Santa reverse formula that's ripe for the picking. Unfortunately, the film suffers a massive flaw that has more to deal with story and production.

Most of the film's run gets uneven with it's plot, with random floosies arriving here and there that do nothing but play red herring for the sake of it, and the protagonists are hard to follow as they seem to have troubles from the pasts biting them in the arse and they're never fully getting around it. (Plus they're poorly acted) Because of this, the characters are either forgettable or just annoying; add a really boring score and some tacky lighting and editing, the result's an obvious desperation for a good B-flick that tries too hard. 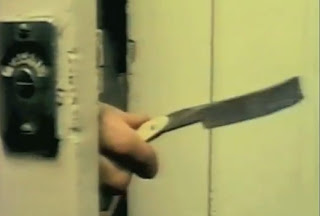 Muddled maybe is its story, but what the film didn't fail to provide are some juicy killings that come off as inventive as possible.( If that's that they were aiming for). Machetes to the face, broken bottles to eyes, and a memorable castrating, Don't Open Till Christmas boasts some pretty neat, if not cheap, bad-taste gore that delightfully passes as decent for any gore hounds alike. Plus, any movie to feature Caroline Munro in a cameo, and break the holy "virgin rule" that every slasher film follows, couldn't be all that bad, right?

While not the best out there, it's a fair share of good, laughable cheese and bad-taste cinema that missed a lot of opportunities to be something great and big. What it did end up is one weird, messy "so-bad-its-good" sleazy B-Flick slasher whose reputation falls on the one who watches it. It's really a love it or hate it flick, doused with silliness that only the compassionate would love.