Where The Monsters Are: Nightbreed (1990) 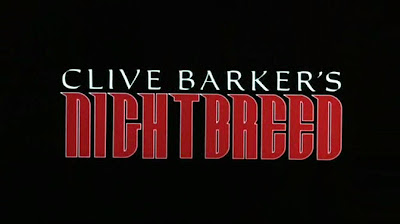 Welcome to Shangrila on Dope!

Aaron Boone is in a constant struggle trying to understand a recurring dream; monsters on the run, a city called Midian in ruins, and him being locked out from its gates. His psychiatrist, Dr. Decker, claims that these nightmares are his repressed guilt of something he had committed while supposedly blacking out; a series of murders done by a serial killer targeting families called the "Baby Slasher". 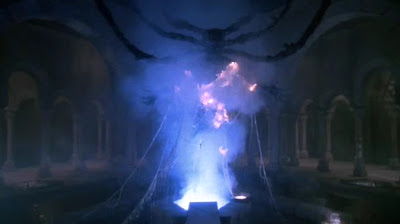 Convinced that he committed these crimes, Boone attempted suicide in the middle of a road by getting in the way of a truck. He survives the hit and get sent to a hospital, where he meet a deviant named Narcisse, who claims to know the place that appears in Boone's dreams. After teaching Boone of the location of the fabled city, Narcisse starts to tear off the skin from his head, causing panic among the orderly as Boone makes his escape. 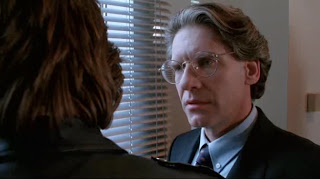 As he reaches Midian, Boone quickly encounters some of the "nightbreeds" after sundown, who tell him that he's innocent because they can "smell" whether one had murdered or not. One of them chomps down on Boone's shoulder out of hunger and chases him out of the gates of their city, where cops were waiting for the man in gunpoint, aided by Decker who feints concern. It is there that the doctor secretly reveals something to his patient: Decker IS the true killer and he's going to frame all of the killings to him. At that, Decker tricks the squadron into shooting the innocent man, believing they finally caught the "Baby Slasher" and their nightmares are all over.

But it isn't over, not with Boone reviving from the bite he got, coming back as a Nightbreed. He is warmly welcomed by the rest of the clan, survivors of a race of monsters, deviants and the like, nearly driven to extinction by superstitious humans. But when Boone's girlfriend, Lori, trying to understand the fate of her lover, decides to drive to Midian in search of her boyfriend's "stolen" body while Decker, knowing Boone somehow survived, tries luring him out to kill him again and keep his secret safe, Midian and its citizens are now in grave danger as they have caught the attention of Decker's sick goal and an overzealous army of redneck locals. 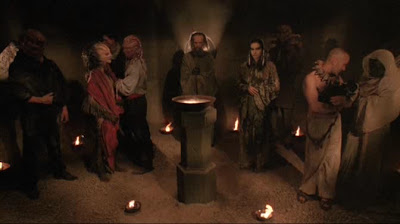 Originally intended to be a three-part horror fantasy epic, Horror Maestro Clive Barker created Nightbreed as an effort to bring one of his novella to life. Interesting enough, the story remained as fateful as it can get to the printed work it is based on, which gives a "speedy" feel to it with a fast pace to keep the audience on their toes. The novella, as Barker would described it, was his love note to monsters and is an imaginative look on our relationship with them as humans. No matter how much we fear them, we envy them of their powers, of flight, shape shifting and even immortality. But in every birth of envy, comes the hatred and intolerance for the things we cannot understand and Nightbreed is that notion made to film, to make us all "feel at home".

Barker did some very effective scenes to put his notion into work, especially one where Lori was made to see what the breed went through at the hands of humans, or as the breed call us, "Naturals"; placed sometime during the medieval crusade, hundreds of them slaughtered in various "Medieval Christian" manners. All the horrifying, some of them surviving their fate, but is forced to watched their kind suffer. It's a powerful scene that can't help but feel for them, seeing such torment. 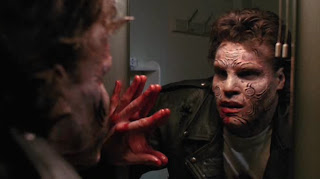 Production-wise, the whole film just looks gorgeous enough to ignore it's short comings, beautifully layered to keep it from turning into a standard slasher or monster film. It's a moral film of prejudice and the like, but it's made with the darkest corners of one's imagination and mysticism, context hidden among the story to keep it all intriguing and unique. The slasher film trope, as much as others find it unnecessary, actually falls in place quite nicely in an exploited kind of manner. Everything simply looks spectacular despite the modest budget, with a finely crafted and breathtaking backgrounds from the sullen city to a quite neighborhood, to the outskirts of Midian to the graveyard it disguises itself as. Following the artistic flow is a wonderfully orchestrated soundtrack, combining ethnicity with bizarre (done by none other than Danny Elfman of Beetlejuice, Batman, The Nightmare Before Christmas, to name a few) 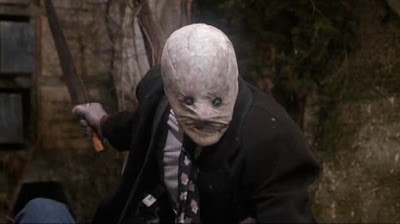 And to add the flair of the city, it's citizens didn't come off simple. With outstanding special effects and make-up, the residents of Midian come in all shape and sizes, each with their own powers and/or deformity but usually far from your usual gnarling and savage beasts. (though some does looked like one) Instead, they're made with affection and human like personality that makes them likable and sympathetic enough to root for. Heck, we even had a local "natural" who tried to defend the clan, but dearly paid a price of his own life when the killer got to him. Among the colorful performances goes to Peloquin (Oliver Parker), a rogue who can go feral and survive a fight; Shuna Sassi (Christine McCorkindale), the quilled lover of Peloquin who shows her fighting spirit when the time calls for it; Rachel (Catherine Chevalier), a siren made out of smoke; Lylesburg (Hellraiser's Doug Bradley), the chief of the breed and of course, Narcisse (Hugh Ross), the comic relief of the clan but just as tough. Hidden deeper into their city are the Bersekers, monster that are beyond control and will ravage anyone, including their fellow nightbreed.

In contrast to the monsters, the film boasts an unusual villain in a reversed role, were men are the true monsters in this film and none of them came to much blind hatred to these monsters as Dr. Decker, the "Baby Slasher" whose obsession on ridding the world of "breeders" (AKA innocent families) comes as far as destroying an entire civilization. Playing our resident slasher is body horror master David Cronenberg, whose performance in this film, masked or not, sends chill down my spine as he rambles about his "work" and his delusion of being Death personified. Among other villains are Captain Eigerman, played by Charles Haid, whose vigilante character nearly took the life of hundred of defenseless breeds, but cowers as the tables began to turn on them. (thus earning him my award of biggest douche of the year!)

And then there's Ashberry (Malcolm Smith) a priest who started off pretty neutral before, at one point, siding with the breed, only for him to later bear a grudge against them after he disfigured himself during the climax. 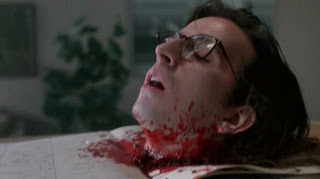 Stuck in the middle of it all are Aaron Boone (Craig Sheffer) and Lori Designer (Anne Bobby), whose romantic endeavors obviously derived from your usual star-struck lovers kind of romance, that between a Nightbreed and a Natural. In the end, Boone saving Lori from Decker results to the vigilantes hunting the breeds down and it is up to Boone to fix it all.

The film's flaw draws from it's strength, which is that it tries to be a lot of things. As perfectly layered as it is, it runs a little too fast to get it all done right. There's a sheer magnitude on all things like characters, subtext and plot, and it punched a lot of holes here and there only to leave it there to be forgotten. Not to mention the groan-worthy ending that screams (literally) for a sequel, but since Clive Barker intentionally wished to make this into a trilogy, I guess there's a reason for all the quick pacing, underdeveloped characters and monumental plotholes.

I'm never into fantasy epics (hence my ho-hum attitude towards Lord of The Rings and Harry Potter series) but this little Novella-based mini-epic does a fine job at it. Heart-warming at times and dreadful in another, Nightbreed is a cult-classic deserving its title and perhaps more. Who knows? Maybe we'll get our sequel...or perhaps a Dr. Decker movie? I'll pay good money to see that latter one! 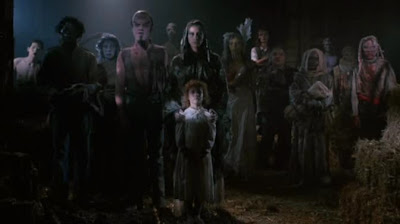