Fate Worse Than Being 'Scared Alive':Island of Blood (1982) 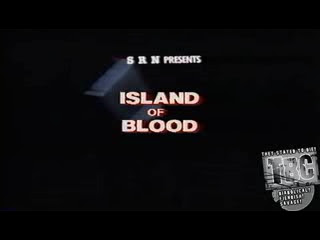 I decided to take a tiny lookie-lookie into this supposed bad boy, boasting a kickass poster and claiming to have taken its idea from my favorite Agatha Christie book And Then There were None. I like that book. A lot. So yes, I dashed to the nearest copy around. (Thank you, Youtube! ...Sorry I take that back) What hit me at the end is something like a badly written rip-off of that book made into film, put to a blender, mixed with cupid's ambrosia and a home made energy drink filled with kerosene. 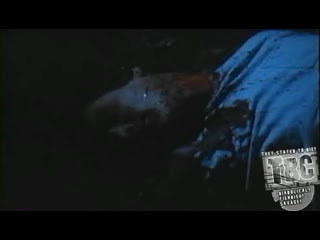 Well that's not the point. The thing is there's a crazy person among them and they just started a killing off the crew, basing their murders on a bizarre rock song's lyrics. Which curiously involves a lot of deaths and killings. What is that? A lame whiney version of Gloomy Sunday?

Yeah well, fuck it. Personally, This movie's really just a long, big wet drag. Does that sound too personal? Well, maybe. I can't help it since it'll take a monumental fuck-up to screw something so simple as a paint-by-number slasher flick! Island of Blood just suffers from a lot of hobbles like bad lighting, awful scripting, cheesy acting ("I'm sorry, it isn't every day that I find someone boiled to death!" ), and lots and lots of draggy scenes. If there's anything more shaven bald dull than this, then I don't know what side of the world I'm in it right now! 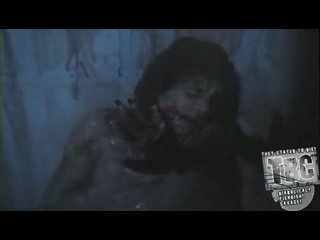 You wanna know where that single star in my rating come from? The kills. A likable bunch, I'll tell you that, but not even these deaths could save the Queen from this utter dreck. Do yourself a favor and if you ever see this film in a rental. Steal it and burn it. It'll get you into trouble, but watching this damn film is a fate worse than  parole.

Bodycount:
1 female shot in the face with shotgun
1 male boiled to death in jacuzzi
1 male has spike pushed into his face
1 male immolated in explosion
1 female showered with battery acid, burned
1 male gets a machete through his gut
1 male dismemebered with chainsaw
1 male killed off camera
1 female found nailgunned to death
1 male nailgunned to death
1 male shot with shotgun
Total: 10
Posted by Kaijinu at 10:33 PM