Boogie Woogie under the Snow: The Boogens (1981) 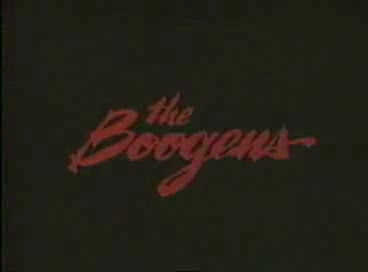 A monster movie built around a slasher skeleton, complete with cliches such as a villain's POV, ignored doomsayers, and even some pretty decent killings, this mine-based obscure horror is a cult treat for many, being unreleased in video for nearly two decades since it's theatrical run.

The Boogens tells the story of a snowbound silver mine being reopened years after it was shut down due to a string of bad luck involving miners getting killed in various accidents. However, unknown to them, this stirs awake something in those caves that is awfully hungry and its starting to take a habit of crawling out in the surface to feed.

Cue some teenagers out for a snowbound getaway with their boyfriends, the latter happens to be working on the mines, too. It's only a matter of time before the monsters get to them and then the feeding begins...

For most parts, The Boogens is poorly acted and scripted, and with the movie's direction have us waiting too long before the action gets going, filled with many false scares that only half work. By the time the monsters have their appearance, the hype can be staled and it just comes out pretty mediocre.

Arguably, I could easily diss away this film for being that bad but the truth is, it kinda added some charm to the film's quality. While it's sluggish and pretty dull at some places, The Boogens' greatest strength is its atmosphere, which is actually great due to the whole movie taking place in the snowy mountains, impressive looking caves and underwater mines, adding much isolated and helplessness as victims fall prey to something underneath them. Cheese fans might appreciate this a bit more, with the entire film dipping into mediocrity as a stalk-and-kill influenced monster flick, whose little critters' design looked like a cross between an octopus, a turtle and a spider. The low budget definitely limited their appearances (and too the effects used to animate them) but made their attacks worth a while to watch.

Bottom line, it's half and half of a good and a bad movie. It does reek of 80s nostalgia and cheddar, two principal elements that saves a bad film any day but at the same time, it could had done more with its scares, kills and, more importantly, its monsters. Silly 80s B-movie at its decent state.

Bodycount:
1 female snared by monster, killed offscreen
1 male had his throat clawed open
1 dog killed offscreen
1 female repeatedly clawed on the face
1 male dragged into the water, killed
1 elderly male clawed and snared on the neck, dragged into water and killed
1 male bitten on the face, clawed
1 monster pounded to death with steel pipe
1 monster immolated in explosion
1 monster had its head crushed with rock
1 male clawed on the neck
1 monster decimated by dynamite, killed in cave-in
Total: 12
Posted by Kaijinu at 1:22 PM