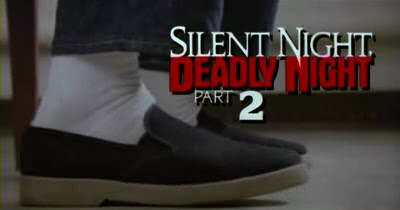 I dunno what I ate the day I watched this, but  after hearing that it is so bad that it's good, I just had to satisfy my curiosity for this supposed sequel to one of the most notorious slasher films made about Father Christmas.
﻿﻿﻿﻿﻿﻿﻿﻿﻿﻿ I don't know what to say, but I think this "sequel" couldn't get any lazier; The first Silent Night Deadly Night was and always will be a certified cult gem, but this, this is just sloth on film. We first see late Billy Chapman's younger brother Ricky, who ended up in an insane asylum where he recalls detailed information of his late brother's descent to madness, quite unusual as that all of his description hit right in the nail, even if he's not old enough to remember or be around those particular moments. I mean he's barely a year old and he recalls how how ma and pa got killed off by Sick Nick that fateful night! Not to mention remember how Billy killed off those store owners even if he's miles away from that area. I'm putting my money on detailed explanation from his step parents, but bleh. Rubber logic at its finest, mates.
﻿﻿﻿﻿ Okay, so around forty minutes, we see the shortened and narrated version of Silent Night, Deadly Night; featuring all of the messy kills and sleaze, chopped into little bits and plastered hastily together until the part where Billy met his demise from a gunning. By then we got treated on how Ricky fared after witnessing the death of his older brother. He later got adopted by a Jewish couple, (easy way out of Christmas!) and was fine until that one fateful day he recalls everything (the murder spree, the orphanage, the gunning down of Santa twice in one day) after seeing two nuns walks by and suffers a "seizure". So he got his broken psyche back and it didn't flowered until much later when his pa passed away and he's old enough to have muscles; by then, he started seeing folks who acts like A-holes, and has develops zero tolerance for such people.
﻿﻿ But things gotten more interesting- or complicated, depending on how you perceive it- when he fell for a random blonde who somewhat gains feelings for him in return. Cheesy love-fest here and saxophone-soaked love scene there, and we get a messier end as this crud didn't last long. Shit goes down when the gal's A-hole ex (who ruined her best sweater!) came back and starts harassing them both, first at the cinema (where Ricky got hold of two murders with a clean slate) and later, out in the public suburbs, where it all escalates into a murder spree and the now famous "Garbage Day" line, before the cops corners him and he tries to commit suicide.
﻿﻿﻿﻿﻿ This all leads to the present once again, some time after Ricky's on four walls of isolation and his psychiatrist is trying to figure him out. Psychiatrist got killed eventually, Ricky made his escape, stole a Santa suit from some guy and now makes his way to end the one who started all of this: that bitch Mother Superior! (Who for some reason is scarred).

While the first's mean spirited approach to the Killer Santa trope got people cringing for moral upliftment, Silent Night Deadly Night part 2 pokes fun on that cringing by redoing the entire first film and merging it with its sequel, so all those little boys and girls who didn't get to see the first film will get their Christmas wish come true. But, as gimmicky as it sounds, that doesn't excuse this film's lazy plot and story; then again, it is the late 80s, and Freddy Kruger got hold of the audience with tongue-in-cheek humor and Jason's jamming with Alice Cooper, for a sequel to survive those years of the neon 80s, they got to be fun and brainless. The Bah!-humbug spirit of the first is lost, and coming in to the rescue is the cheese. Lots and lots of cheese.

But, told true, I got to say the cheese worked for most, as the once considered "worst" of the series is starting to water down into a "so-bad-it's-good" type of hype. Yeah, I agree, it's terrible, unevenly paced and badly acted, but laughable enough to forgive. It's dumb, stupid and braindead, and even if all three of these words meant the same thing, I got to say it all as separate entities to deeply point out how terrible it was, production-wise. But if you got a shot for the weird and wonderful, then Silent Night Deadly Night Part 2 may be your cup of tea. I should suggest, like always, not to take it seriously. I mean it. Doing so might give you brain cancer tumor pus. Just switch off, learn to laugh like Ricky and have a merry, cheesy, deadly Christmas!