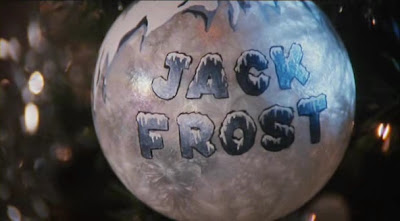 Jack Frost (1997)
Rating:***1/2
Starring: Scott MacDonald, Christopher Allport and Stephen Mendel
﻿
I think I remember taking a glimpse of this film one grade school night ago, all the while being tucked in my bed. (Cuz, you know, school night) The very thing that got stamped in my noggin from that then-fazed memory was the scene when our titular killer melts from something and got his cells merged with the snow. It was awesome for my grade school self and I never forgotten about it.

Now imagine my glee seeing the whole movie for the first time and actually remembering these little snippets mixed with the bizarre, bound-to-be-magic in the air, and then thanking the stars that the film didn't suck much either!
﻿
Convicted serial killer of 38 victims all across the five states, Jack Frost was on a snowbound transport to his execution one December night when the truck got more than a tap against an incoming tanker containing experimental genetic stuff. A car crash here, Jack thrown off there, and viola! Jack's back and he's ready for some killing!

But not before the genetic acid blows out of the tanker and douses the killer, melting him like there's no tomorrow before reconstructing our killer on a molecular level, to be merge with the snow! So not only is Jack's still back, but he now has a new frosty look and a nearby town has a new problem to deal with other than under-cook cookies. Who can save them? Why the town's sheriff Sam Tiller, who's the one who had successfully nab Jack Frost.

Whacky, twisted and full of Holiday Cheers and Fears, Jack Frost (1997) is one title that truly earned its cult status; it's cheap at all costs and hardly believable, the movie's main interest is to make us laugh while dishing out the goriest and creative killings under the Winter season. And since our killer's a mutant snowman, guess who got it made with icicles shot to heads, throats mutilated by snow, and one of the weirdest murder-rapes there is? Ole Frosty's lovin' it all and they're as gory as they can get, all the while spewing his own one-liners with groove and charm that, well, plenty  actually work as chuckle-worthy.
﻿
The main protagonist casts here are a likable bunch of friendly folks who got nothing more to do than bake oat cookies, build snowmen and make sweaters. They're completely clueless about the deep shit they're plunged into, but that doesn't stop them from being cool and badass in the last act, dishing out them blow-dryers! The Ultimate Anti-Snowmen weapon!

It this kind of films that are supposed to be bad, but energetic execution and dry wit go a long way here that it actually saves the film for some. It's a horror-comedy trying its best, openly inviting its viewers to look at its flaws, the underdeveloped characters, all the mediocre special effects and, of course, the mountainous of amount of cheese, and daring them to double these as the movie's strength.

Jack Frost (1997) is, perhaps, one of the more contending Z-grade slasher movie title there is and for that reason alone, it again deserves all the horror junkie's love and attention. That is, of course, if they got a taste for the weird and wonderful, or just plain appreciative of a funny attempt to make a good (if not one of the best) popcorn flick ever! It doesn't shake anything big but cheesy fun all through out so I dare you to slip this in your Winter holiday viewings. It's worth it!

Bodycount:
1 male had his neck stomped on, broken
2 males killed in car collission
1 elderly male found with a broken neck
1 boy beheaded with sled
1 male gets an axe handle shoved down his throat
1 female forced fed with ornaments and gets a Christmas star to the head
1 male ran over by reversing car
1 male impaled on the head with shot icicle
1 female repeatedly beaten to the wall
1 male had his insides mutilated
Total: 11
Posted by Kaijinu at 10:25 PM