(Note: try not to get any of this so seriously. It's all for fun. So Loosen up! It Helps yer BUH-RAIN (brain)~!)
So, it's that time of the year again when everything's cheerful, you get yer 13th month pay and all yer friends and families get together to celebrate our Lord Jesus Christ's birthday... Jewish folks excepted. But what's this?! A loon is out in the night killing people?! Oh my, does this mean Christmas is over for everybody?!

Well, not really. So a killer is out there dismembering a happy family in more ways than one, but that doesn't mean you can't enjoy that one time of the year when you get to go home early and relax with a nice hot cocoa and a sweater. So what can you do to ensure your (as well as everybody else's that matters) survival? Well my friend, here are some easy steps to survive the night, ensuring the Holiday cheers wouldn't turn into Holiday fears even if the maniac have his axe on you.

Step 1. Relax. Make some hot cocoa, put up a fire on your chimney or whatever you got to heat the place up and sit on a chair.

Step 2: Know the location of where the break-out happened. Let's face it, you can't be sure that this guy will even come to your neighborhood if he's ten or fifteen states away from your cozy little cabin or house. If that is the case then just relax and keep a shotgun near you, but if it turns out the killer's around the premises or is a town or street away from you, we better jump to one of these: 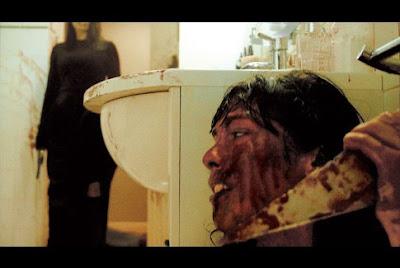 Step 1: So the killer does turn out to be active around your neighborhood, the worst thing you could do is call the police right away cuz, in case the killer is skulking around your house, they will find out this way that you are aware of their presence. There's also a matter of annoying the cops into thinking you're one of those folks who go paranoid-delusional about killers under their beds, especially if there aren'y any sightings of the maniac around your premises. Yet.

Best way to approach this is to prepare weapons that you could use to defend yourself. Real weapons! I'm not talking about pen knives or kid's scissors. I'm talking about BUTCHER KNIVES, HATCHETS AND, most effective of all realistic weapons that can be found in a household, SHOTGUNS!

(Note: weapons would only work on human killers. If they turn out to be supernatural then you're in deep shit...)

One of the biggest mistakes of people defending themselves do is that they always let the killer gain access to their weapons. In case you do have your weapon ready, why not try locking up your drawers? Or keep all the shotgun shells nearby where you could find it? Hide all your weapons near you and make sure you don't lose sight of it. The moment you do, the sooner they can use it against you.

Step 2: Never, EVER, board up your doors and windows. Come on, face facts, sooner or later they will get in and you've got to defend yourself. The very last thing you will need once he got in is that you locked yourself inside your own house and the killer got you cornered because the only exit you got just so happens to be behind that loon in a Santa suit, wielding an axe. Lock your windows and doors but not too much or else it'll be hard for you to unlock it once the killer gets the upper hand.
Step 3: If by any chance the killer did get into the house, never shout out stupid lines like asking if there's anybody looming in that dark unlit attic. The moment you do that, the killer knows you're aware of him and he's gonna panic. If he panics, he'll kill you. And if he kills you, you're dead. If you're dead, then all yer loved ones will gloom. If your loved ones gloom, they'll hunt down the killer. If they hunt down the killer, they'll probably end up in bigger trouble than you did.

If a situation like this do happen, go outside, run to a hated neighbor and ask for his/her/their help. It may take some time (and patience) before this feller helps you but once he/she/they did, use his/her phone to call the cops and then stay for a while. Chances are the killer probably find out about you escaping and he'll hunt you down. Plus, he'll would likely kill your hated neighbor along the way. Take that as a bonus for the both of you!

Step 4. If the killer attacks, don't panic. Go LOW if it's a dude, go high if it's a chick. Be smart and go for where it hurts the most. If he/she's down, don't be stupid and run away, go get something to EFFECTIVELY kill him/her and finish it off.

Step 5. Don't stop once the killer stopped moving. Best to take the one most overlooked precaution: aim for the head. If you could cut if off, the better.

Note: Be sure it IS the killer. Who knows, it might be Uncle Henry in a killer Santa get-up... Unless Uncle Henry IS the KILLER! DUN DUN DUUUN!
Step 6. Call the cops about a break-in. Never give them the full info. Best to let them know once they get there. Do this in case the killer might get up if you somehow forgot to do Step 5.

Step 7. Be cautious. There might be more killers lurking around. Best to reload your shotgun in case of this.

Step 8. Ask for money once the media and the state found out about your "heroic" grapple against a psycho. Spoil yourself a little. You killed a dangerous criminal and a probable loon, you just saved hundreds from a night of terror from this man/woman and/or more likely avenged a fallen loved one. Not to mention all that psychological torture! You'll be needing therapy for that! And let's not forget the broken windows and furniture. If you're not too shaken, this is one good way to get more cash~ $$$$CHA-CHING!$$$

In case of a partying group:

Now chances are these cops will get their noggins chopped off the moment they arrive so I suggest you also prepare. Again, find weapons to defend yourselves with, keep it with you all the time and please, try not to get too carried away. (like playing with your guns and make "pew-pew" sounds...please, it's a life and death situation...use that brain of yours). And try to remember to put all of your weapons in a safe, well guarded place.

Step3. Never board up ALL your doors. I explained this to you already, so don't make me say this all over again. In case you're staying in a new house, scan the area for potential emergency exits as well as tools to be used as alternative weapons.

Step 4: Know your guests. See any unfamiliar faces? Be suspicious of them, but not too suspicious. The last thing you'll need in a time of crisis is folks getting on each other's throats. If possible, know the killer's face from sources. (Internet, radio description, flyers, that old man who kept shouting "EVIL! EVIL IS IN THAT HOUSE!")

Step 5. Have fun in the meantime. Look, it's Christmas; with or without killer, that doesn't mean you can't enjoy it. Have a few drinks, play some games, chat, mingle, eat, etc. Just don't get too rowdy, or else you all will just pass out. Yer be like sitting ducks for this big guy.

If it's toilet, shit faster! Piss faster! It'll hurt but it's better that than an axe between yer legs. Do same escape from the sex option.

Step 7. If killer ends up in the house and you are all in there, be wise guys. You have assorted weapons to take this guy down, why scream and panic in fear if you all could work together and kill this feller? Don't want blood on yer hands? Then by not just knock the guy out, cut off his fingers and tie him up. Yer not killing him and he won't be killing you now.

P.S. make sure you cauterize them stumps. He'll bleed to death.

Step 8. If killer, for some reason, is now hacking your friends effectively, relax and do the following: take a deep breath, walk outside (if killer's in the house), be cautious, and silently run to a rival neighbor. Use their phone and call the cops. In case killer/s follow, use yer neighbors as ruses and run like hell.

Step 9. If you are cornered and happens to have a buddy or two with you, try not to be a hero and ask the rest to go on without you. You got to be very stupid to think you can take on a hulk by yourself. If possible, try tackling down the killer as a group and beat the tar out of him. If you can't, better run off as a group and try not to look back.

Step 10. If you guys managed to kill the killer, make sure he is dead. We've been through this before, you know why.

Step 11. If police arrives, try not to scream at them. If that freaked them out, they'll end up shooting you. If you must do anything, just wave your arms and flag them, then lead them to the killer (dead or alive...alive would be a better option but if you must kill him/her, then go.)

Step 13. spoil yourself whenever you guys do get the money.

If against a supernatural killer:

Step 1. Okay, if a demon can do stuff during Christmas, then you're in deep shit. Normally, you would know this from either one of the two situations above. Signs of a supernatural killer would include: teleporting, having the ability to fly, materializes weapons out of nowhere, can naturally breathe fire or cough out hot coal, apparent immortality, able to ride undead horses on roofs, and having the stench of the undead.

In case of living or sentient objects, just think of that object's sole weakness. If it's a living tree, use fire. If it's a killer snowman, use anti-freeze. Killer doll? Depends what kind.
Step 2. If you are out against a supernatural, best to try and use the usual methods (crosses, garlic, stake, holy water, basic yoga, etc.) If all things fail, try using a spell book. Spell books can be found in the occult section in your local libraries. (There's always at least one or two.)

Step 3. If this fails, well, kiss your life good bye and time to meet your maker...or whatever you believe in, you godless heathen...

Step 4. If you are successful, well you're still in a heap of trouble cuz you got a lot of explaining to do with your house being messed up and your friends and family being dead. Cops aren't gonna take the ghosts of Christmas pasts killed mah family story, so try thinking a believable one...

So, there you have it! Easy to follow steps to keep you alive for the next year or at least until the killer's son decides to follow his dad's footsteps and go hunt you down. Just remember the important ones and I'm sure you'll survive. If you didn't, well...my condolences to you, my brother. But til' then,

Email ThisBlogThis!Share to TwitterShare to FacebookShare to Pinterest
Labels: Random Stuff, The Holidays