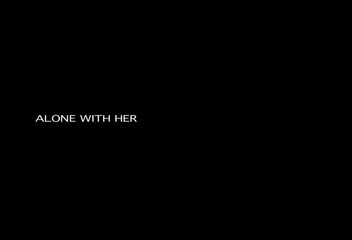 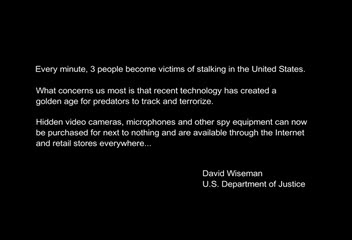 If there's one thing that slasher films taught me is that humans can be the ultimate monster; murderers, rapists, psychopaths, almost everything we fear in life are brought upon criminals one way to another, may it be through something as big as wars...

Doug is a man that simply exists; he has no job, no family, no friends, and the only thing that keeps him going is his terrifying agenda of stalking women. His current target is a girl named Amy, whose room he bugged with hidden cameras in hopes of learning more about his new prey.

We all see this through the perspective of Doug's multiple cameras and the realism of the situation is among the many pros Alone with Her have; the further the story goes, the more we see Doug invade Amy's life with a nice guy facade, building to more uneasy and dire situations such as Doug's attempts to ruin Amy's work and peer life just so she can be more vulnerable to his advances (which includes getting her fired and murdering a few friends) as well as skincrawling "normal" moments such as Doug's courting that Amy nearly feel for. We get to see most of these scenes in detail, so the film can get a bit slow which, seeing how effective these scenarios go with the tone and direction the plot was heading to, exactly the kind of slow burner pace welcome for this creepy chiller.

Since a lot of the factors here were more on creeping the audience with realism, another element that made Alone with Her worthwhile are the talents involved; Colin Hanks took the role of Doug and, I have to say his portrayal of the pathetic yet dangerous creeper was spot-on, both in action and looks. He's vividly unnerving, which is in complete contrast of the friendly and "normal" portrayal of  Ana Claudia Talancón's character Amy, in turn making the stalkings all the more triggering and had us worrying for Amy's fate in the end. There's no superhuman monster, no dumb teenagers doing dumb things, just two kinds of people that you can encounter everyday, being themselves in both good or bad way and it's all what the movie needs.

Judging from all of this, it's safe to say that Alone with Her is not a slasher in any way, but I believe this is just as interesting of a watch as any bodycounters out there. With most of the recent slashers hacking up unsympathetic and bland casts just for the sake of kill count and gore, it is kinda sad that we can't feel and be afraid for them just as we did back then; I guess this is where Alone with Her comes in, reminding us that human monsters can still be scary in the movies, especially if it can easily reflect what can happen or is happening in real life.

If you find voyeuristic tendencies scary or just want something different for your found footage thrillers, Alone with Her is a good title to start with. Kinda makes you wonder if someone is watching you right now...