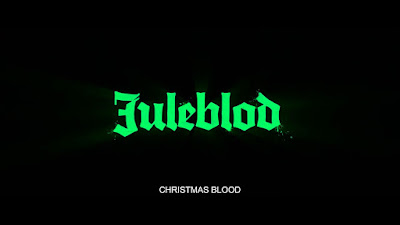 A gaggle of gal pals are taking a holiday trip to a small isolated village at Northern Norway and are determined to make the best of it despite the recent tragedy. Unbeknowst to them, a serial killer dressed up as Santa Claus has just escaped from solitary, nearly six years after a 13-year long killing spree, with plans on completing a monstrous bodycount. Hot on the trail are a pair of detectives hailing all the way down South in Oslo, racing against time to figure out where Ole' Sick Nick is heading to and stop the maniac once and for all.

Christmas Blood (2017) is a film of halved narratives intertwined with each another, one being your typical teen slasher with a Michael Myers-esque killer Santa and a whole lot of drama to build up characters, the other a cop thriller where we follow an investigative crew absorbingly putting the pieces together to where their perp is gonna strike next. I could say that the direction did had me watching intriguingly to what is unfolding in the plot and I find myself enjoying every step in the way, but that's only half the truth.

At most, the cop-centered set-pieces are tolerable and the emergence of rivalries, dark secrets, and sexual tension within the girls have their entertainingly cheesy moments, but the pacing for both is a chore to sit through for their slow burn attempt and the editing did make it hard to keep up with the story at times, especially given the fact that the slasher half of the movie takes place in far up North of Norway which is apparently dark 24/7. You couldn't really tell the time and day unless a character or two point it out, typed on screen or at least is implied through the procedural half of the plot.

On the plus side, the gore effects in this movie are brutal at its best despite most of it being axe murders. It can get repetitive, yes, but there are moments where the kills get a bit fun for being implausible and some of the better kills were directed to deserving people (like a pair of scummy hicks and a cheating couple), as well as one shocker of a victim which is tastefully done offcamera. Do wished we get to know more of our killer Santa here, though, as his motive, while admittedly impressive for the numbers alone, was never explained any deeper than what is simply a demented killing spree. We did get something of an answer at the near end, but all it did was raise more questions and maybe a chuckle or two for the absurdity of it.

Ending on a padded Halloween (1978) "He's still out there"-style finale with a side of mercy killing, Christmas Blood (2017) is everything you would expect from a familiar Santa slasher flick which is either a good or a bad thing depending on how well you take your yuletide bodycounting. Personally, the film's dragging pace killed most of the enjoyment, but the bloody kills made up a lot for the fun lost so not entirely a dreck, thankfully.