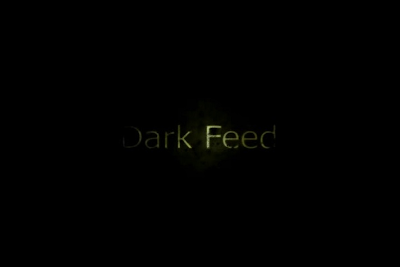 From the writers of John Carpenter's The Ward, comes yet again another medically themed mayhem where normal people go crazy and crazy people go crazier.

A film crew is busy making a low-budget horror film in an abandoned hospital where it is said that a mad doctor used unorthodox psychiatric methods to treat his patients, mostly involving a strange black liquid that the hospital itself is leaking with. As the filming went on, the lack of sleep and patience seem to be getting into the nerves of pretty much everyone on board, and the strange evil force that still lurks within the walls begins to influence them into violence.

As people starts disappearing, those who still have their sanity intact have no other choice but to survive and try to escape whatever's happening to them, but with crazies attacking left and right, was there any hope for them living through the night to begin with?

Dark Feed could have been a very deep and disturbing slow-burning chiller under the same vein of films like Session 9 or even The Shining, where normal people suffers through their job psychologically and ends up hacking their co-workers to death with an axe in a case of cabin fever. The problem, however, is that Dark Feed, in comparison, lacks the same air of complexity in terms of scripting, making the characters paper thin, their lines hammy and the actual movie itself is nothing more than a series of scenes that develops very little of the plot. Would have been a better film if it gone a tad deeper within its context of madness, but it's been declared early in the beginning of the film that the maddening is something otherworldly and supernatural, thus it devoid the story some sense of mystique and intrigue. Incidentally despite this fact, we don't actually see the supernatural aspect of the film "in action", as in how it even managed to corrupt our casts so, in a way, the nature of the supernatural is still played mysteriously, resulting to a chaotic climax where everybody just goes ape.

What Dark Feed lacked in plot originality and in real character development, it makes up with what some might find watchable; gore-wise, we do get a lot of nasty set-pieces of bloody red mayhem of self bodily harm to a props guy hacking up leading ladies with a wood saw as the film progresses. It's a real bloodletting and fans of bodycount films might find some great slasher-esque stalk, chase and kill scenes once the shit hits the fan, featuring a group of deranged film crew in various get-ups, which can be a tad cheesy, but unnerving still. The net result for Dark Feed is a little less of a supernatural haunted house kind of horror, and more of your traditional psychologically driven slasher film.

The movie also looked expertly shot and we do get a lot of good frames here that settles with the tone of the movie. An empty hospital is always creepy, but the fact that the entire film took place in the darkest parts of this dilapidated building gives a good sense of dread and atmosphere that works. Talent is questionable here, I'll give you that though. I don't know anyone here and it might be the one-dimensional script, but I got a feeling they could have done better.

Dark Feed is a lot of misfires as a horror film, but for the right audience, it could be a worthwhile watch. I'm not overly hyped for this, but I do respect its efforts so if you're interested in seeing it, just be cautious. Insanity can be Contagious...