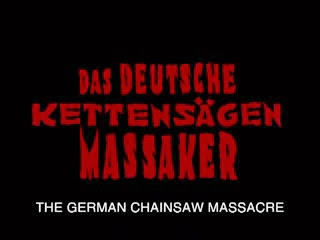 It's hard to enjoy a movie that spends a good hour and something talking their way through scares, gore and nightmarish atmosphere, and you don't understand shit.

The German Chainsaw Massacre is a satirical art film that had a group of insane, white trash family of butchers hunting down those who crosses the border, a few days after Germany's Reunification. After murdering (what I believe to be) her boyfriend, Clara sets out to meet up with her lover, who just so happens to be living on the other side of the freshly fallen Berlin Wall. Inevitably, she gets tangled with the family's bizarre and chaotic lifestyle of turning people into bratwursts and commenting everything regarding the fall of the border.

As interesting as it sounds, I find the movie hardly accessible if you're not aware of what exactly is all of this supposed to symbolize. It took me a lot of research to understand what the hell are these people on about, yet even then I still find it hard to fully enjoy the movie as a horror flick.

Too many random and unexplained scenes rears up and while it does work in a sense that it brings out a bit of nightmare logic, where everything is beyond your control and understanding, the film's campy tone and overall strangeness just doesn't cut out. Plus, I never was a man of politics and as much as possible, I want to avoid the subject, not because I'm sensitive about the subject, but because I find it extremely boring and I never really cared much about it. (What can I say? I'm a free spirit!) So with the subject of the reunification (or unification) of Germany being the core satire of the film, I can't help but feel a little confused and bored, so much that not even the film's gratuitous gore can enlighten me. (I'm not that shallow)

True, however, it does leave an impression even if The German Chainsaw Massacre is hardly a movie. (More of a jumbled collection of random scare, gore and surreal moments if anything) Budget looks pretty mediocre and the acting is really distracting, but the movie does still cook up some fair game for horror fans. The bloodshed is anything but tame and since the film borrows elements from the first two Texas Chainsaw Massacre films, it's weirdness is off its rockers (Even more than those two films combined) and the movie will certainly find fans from those who love weird underground cinema.

As for me, I do have my share of favorite "Art films"; the hypnosis-inducing Anguish (Spain, 1987) and the Grand Guingol-esque Troma title Beg (1994) being my favorite under the slasher sub-genre, and too David Lynch's infamous Eraserhead and Takashi Miike's Audition in general horror. The German Chainsaw Massacre made a close cut to being an acceptable bunch with its story of a grue-happy family of murderers and butchers in a mission to turn people into meat by-products, but with it being too convoluted for enjoyment and harboring a hidden subject that I never really cared about, it falls a tad short.

Perhaps I'm being really bias with this, but when I watch a splatter film, I'm the kind of guy who does it cuz he spends a whole day working and just wanted to relax with a fun and messy horror movie the moment he gets home, not to be force-fed with another history lesson. Am I a little ignorant? Maybe, but I'm positive The German Chainsaw Massacre has, and will have, its fans. I'm just not one of them.