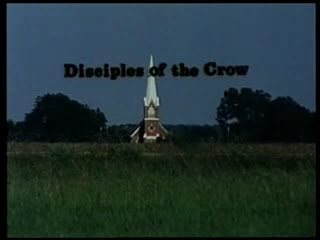 Nah, kidding! But seriously, before the popular Stephen King short gets the feature length treatment, there's a short film version of it all the way back in the 80s. Kinda cheap but what do you expect from a few hundred thousand bucks worth of production?

Disciples of the Crow follows a small town in Nebraska that's ravaged over the years by its children, who happen to be a part of a child cult worshiping a crow deity. In the present, a bicker couple find themselves in a situation wherein they apparently hit and killed a child with their car. But upon further investigation, they find out that the child was already dying from a throat cut and they're nearby a town inhabited by murderous tykes and teens. Uh-oh.

While the 1984 big budget slasher title took enough time to fully establish its premise and enough explanation to at least explain what's going on, Disciples of the Crow lacks this. The film's only thirty minutes long so I wouldn't be surprised if it's missing a lot of action, the acting's a bit off and there isn't really a lot of good production value, but what's really missing was enough time to build around the story, thus failing to take advantage of its exploitative themes of child cults. The cast is hardly rootable and the plot was too fast paced to give us some decent scares or kills.

But frankly, it's really an okay effort and a watchable work all in all. Good for what it is, but not really worth going out of your way to find.

Bodycount:
1 female killed with fire poker
1 female hacked offscreen with axe
1 boy had his throat cut with dagger, ran over by car
1 skeleton seen as scarecrow
1 male had his head repeatedly stabbed with dagger
total: 5 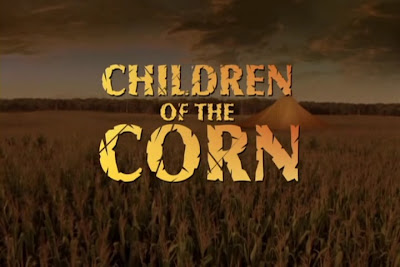 I don't understand the hate around this one; I really thought this is a decent film despite it's cheapness and exploitative nature. But to each their own, I guess.

The plot follows the Stephen King short more closely compared to the hit 1984 slasher-hybrid, wherein a troubled couple ended up hitting a young boy in a lonely Nebraska road, only to find themselves being stalked and hunted in a nearby town by a murderous child cult.

So far, the goods that this film brought us would be the lavishing camera work, the well acted roles, and some truly terrifying attacks, both on adults and on children. It sorta starts slow but around the second half, it paces along nicely and threw around some style and tension that actually worked well.

The only big draw back here was that neither of the lead characters are really likable or sympathetic. We couldn't feel for any of them and, in the end, we're just rooting for these kids to kill these people and get it over with. Also, being a faithful run on the original short story, the film had done hardly anything to heighten it up from the usual story; if you've read the short, then from beginning to end, you know what's gonna happen save the random sex scene in front of an altar which is, by far, the only exploitative piece from this picture.

Children of the Corn (2009) could count as a wasted potential. The franchise had always been a dry run, with only two or three good follow ups done so far, so it's sad to see one with quality production drop half way from decency. Too bad, I really enjoyed it, but I guess a little variation and better leads do come in a long way when it comes to success.

If you're a fan of the original film you might be slightly offended, but I wouldn't stop you from giving this title a shot. It's not unwatchable and you could find worse things to waste an hour and a half on. Fields of Terror and Genesis, I'm talking to you.