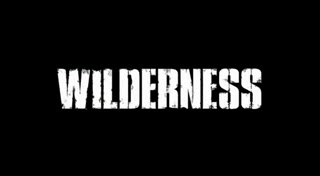 Am I a little too harsh for giving a beautifully gory movie such as this such a low rating even if it did delivers the grue? Perhaps I am, but sometimes, I can never be so shallow.

When a young delinquent committed suicide inside an recreational institution, the rest of the juvie pack got shipped off to a deserted island to do some actual recreation, reflecting of what could be a life outside of crime, and other whatnots. But then a crossbow-armed killer in a camouflage shows up, accompanied by a pack of well-trained killer dogs, and starts hunting down these young bastards as well as a group of all-girls ne'er-do-wells who were there for the same recreational reasons.

And somewhere in the Philippines, a dude is typing all this cares not one bit of these people.

Wilderness had it all going for me; good grue courtesy of some very nasty dog maulings, a barren backwoods island that is a ringer to one of my fave underrated titles, Humongous (1982), and the survival angle is always a plus point for me whenever its features well-paced action that actually delivers.

But, they have to ruin it by giving us the shittiest characters to root for. I mean, hooligans? Really? This movie is expecting me to root for a bunch of shaved-headed teen hooligans? Now, I wouldn't mind seeing them get killed off by a cool killer and even get some sort of development at some point, or at least make these guys a bit more likable, much like how See no Evil pulled it off. But no, what we get is a bunch of annoying teenagers, with hardly anything to show off for other than to scream at each other or be sniveling pricks, being killed off.

Sad to say, even the bush-dressed killer can't bring out the goods. Despite the fact that I like how he trained those dogs to sit, stay and kill, his lack of presence almost looked like as if the whole movie could had just gone along without him. Heck, the cast even watered their own number down once they start to turn on each other, so what is the point of the killer here? A looming presence that delivers panic?  Israel's Rabies (2010) did a better job on that! Sad, really, as the bush-look was really working.

Sometimes, I can try to be shallow; I can try to love a movie for the grue, for the laughs it brings, for the cheesy entertainment, but frankly, this movie only had the grue working. Suspense is good but with the lack of characters worth looking out for, sometimes you just wished they could had just at least made it cheesy for us to enjoy. It's this lack of charisma that resulted from awful dialogue and scripting, and a messed-up ending where you hardly care if anyone survives anymore.

Shame. Real shame. Killer dogs had me, Lack of empathy lost me.