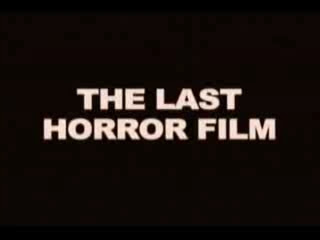 If Maniac dwells in a shit hole of depressing proportions known as sleaze and grit, The Last Horror Film dwells in cheddar. Loads of it. And while we all may remember Joe Spinell (God rest him) as the neo-classic human monster Frank Zito in Maniac, I saw a different man in this psuedo-classic. A more enjoyable man, if I may add, in a twisted way.

Meet Vinny, overweight taxi driver from New York living with his mum, who's a big fan of a horror starlet Jana Bates. Reading that his fave actress was heading to Cannes for her movie's opening night and award, Vinny books to France to follow his dream star and have her star in his imaginary film, "The Loves of Dracula".

But when people around Jana Bates starts to die in grisly fashion, all fingers point to Vinny with his twitchy ramblings, cryptic love letters and his hate for all things blood and guts (ironic since he wanted to do a horror flick with Jana...) When too many of Bate's entourage turns up dead, she finds herself confronted by Vinny, one last time in a clever twist that no one may had seen coming.

Released in the early 80s where slasher flicks are in full run, The Last Horror Film, at one side, is a socio-commentary on how gory these films are for their time, as well as looking into the subgenre's popularity around the independent side of film making. This is played with a conflicting note as the film's madman is against the violence he sees in horror flicks, complaining that their too gory and messed-up to be enjoyed. To add the strangeness to these views, Caroline Munro's character, Jana Bates, defends horror films at a press conference scene and even made a point on how these films worked through the Jodie Foster/Robert Hinkley case! But seeing this is a Troma released film, you can expect this social commentary to be easily swayed away with cheese and sleaze, thankfully balanced enough to be watchable fun!

Gore hounds will be happy to know that blood runs freely in this picture, and that's not limited to the actual murders itself; more often, we do see some fictional movie clips watched by Vinny featuring some nasty gore, including one particular scene involving a hobo eating a disembowled young lad!

It's also sleazier than Spinell's Maniac, featuring shots of Cannes beaches with topless girls with varying bust sizes and angles, a strip bar scene, and a night scene wherein Spinells sniffs ladies' underwear while watching the three others frolic naked on the beach. More to say, it's something you could expect from Troma, but I'm not  complaining one bit for this time around!

It's probably the campy nature of the film that got me; it's nice to see Spinell in a flick where he's smiling as much as he is in turmoil. The ending of the flick packs a nice twist but as far as plot reveals go, I love the good-natured and comedic tome! (Plus it has Spinell's real mum playing his characters own mother! It's hilarious!) So Spinell fans will definitely have a good go with this one, as of the true slasher fans out there who likes their sub-genre with cheesy delight and a good bloody reel!

Bodycount:
1 female electrocuted with live wire (film)
1 female had her face burned with flame thrower (film)
1 male gets a throat cut with switchblade, decapitated
1 male hacked to death with hatchet
1 male disembowled with knife (film)
1 male stabbed to death with knife
1 female shot twice on the back of the head, falls off a tower
1 male shot
1 male slashed repeatedly with chainsaw, decapitated
total: 9