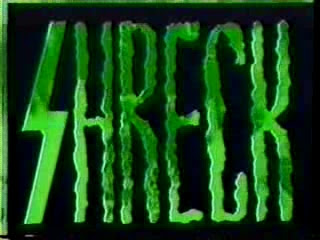 First of, no, this isn't about that Green Ogre your younger brother, sister, son, daughter, or annoying neighbor kid loves, but rather it's a rare Shot-on-video slasher flick about a trio of horror film and Nazi enthusiasts (AKA Nerds) who unwittingly summons a Nazi from the grave after a mock seance.

So, what to say to a film that had absolutely zero budget and talent? Well, actually, it's pretty fun! 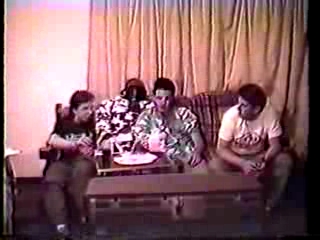 Yeah, it's a cheap Z-Grade entertainment made by some guys with a video camera, with absolutely nothing to redeem its horrid production other than, well, itself, but frankly, the movie itself has that vibe. That "so bad it's good" vibe. The same kind of entertainment you can get from watching films like Nailgun Massacre or Truth or Dare: A Critical Madness.

Perhaps it's the big concept that these guys had thought out; undead nazi returning from the grave to mutilate and flay anyone that he could get while his ghostly victims serves him? I say I agree with the 'producers" when they said this title could had gone better with a bigger budget, but for now we can settle with plastic bags as portals, people under white sheets as ghosts, a Swastika lawnmower and one weirdly edited "documentary".

Horror junkie and Nazi enthusiast Roger invited over his buds, Neil and Mike, to start up a tour spot business out of an alleged Nazi, Max Shreck's house of torture. That day also happens to be the anniversary of Shreck's final mayhem when he murdered at least eleven people in various torture devices. 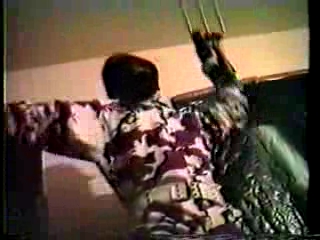 After a boring afternoon watching Nazi propagandas and eating Swastika Pizzas, the group decided to do a mock seance invoking the spirit of Shreck to return from the grave and continue his mayhem. However, the seance worked and now Max is back, digging up corpses and reviving them as white-sheeted slaves, as well as killing off his summoners with various weapons and torture devices.

Armed with rifles, the trio band together in attempt to survive the night, but with the undead Nazi slowly molding reality into his own past, and ghostly sheets popping then and there, can they really live through the night to see the day?

And what's up with the random ghostly cops?

A decent underground horror flick; worth a checking out if you could get your hands on a copy!

Bodycount:
1 male pitchfork to the head
1 female nailed helmet forced into her head
1 male decapitated by a Swastika lawnmower blade
total: 3
Posted by Kaijinu at 5:48 PM