A supposed merging of minds from two Italian horror flick legends -the gialli maestro Dario Argento and the Italian Godfather of Gore Lucio Fulci- what we have here instead is the final product of circumstances. Fulci, you see, passed away a few weeks before the film's production began, thus the directing job was handed over to special effects expert Sergio Stivaletti. I can't be sure myself what the whole flick would have been at the hands of Fulci but eitherways, this film had me speechless. Both in a good and bad way.

Twelve years later, a young man in Rome apparently dies of fright after sneaking into a wax museum one evening for a bet. As morning comes, the incident is investigated and brushed off as an unexpected accident, all the while the museum's owner and artistic genius Boris Volkoff (Robert Hossein) takes in young Sonia (Romina Mondello) as a new staff for his prized museum documenting ghastly murders, unaware of a horrific past haunting her until this day.

As the city's residents continue living their days, it isn't long before a black cloaked figure begins abducting prostitutes and children off the streets, and the museum's supplies of wax figures is suspiciously growing...

As you can tell by now, The Wax Mask (1997) it's supposed to be based on the classic House of Wax (1953) story with folks getting killed or disappearing, only to turn up later as displays in a museum. This comparison is where the problem starts but before I go ranting about the drag this film suffers from, let me first point out the positives.

The movie has a good eye on historic settings and even pays tribute to classic horror backdrops of gothic buildings and secret dungeons that echoes a bit of Frankenstein (1910). Pacing is steady and builds enough suspense when the movie calls for it, such as the two child attacks that happen right after the other. There's one murder in which a man gets an entire hand ripped off by a cool looking metal claw before getting his throat cut and his heart ripped out, a ghastly overkill that no doubt got my attention.

The Wax Mask (1997) certainly has a strong giallo influences to it, too, with its killer donning black gloves and cloak, as well as the notable greater emphasis on the actual mystery itself rather than the murders. There's some sleaze thrown in, notably the fact that female victims of the "waxing" are stripped topless before the operation, though I'm quite unsure how to feel seeing preteen boobs on the screen. 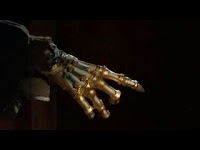 Despite a few underdeveloped scenes, the story manages itself enough to keep a straight tone until, that is, the "waxing" process is shown. It is in this scene that we get a glimpse of how strange the rest of the movie is going to be as, without spoiling much, The Wax Mask (1997) decided to dabble in some sci-fi, a last minute merging that resulted this movie's horrid twist reveal and perhaps one of the worst endings I've seen. Sad to say, the silly and overly confusing conclusion the whole movie's working up to was damaging enough that the story goes down like a house of cards, creating even more plot holes than I could imagine.

I understand that Italian horror has this substance-over-plot nature that meant nightmare logic would be used somehow and while there are exceptions to this fact, one cannot deny that some of the greatest Italian horror flicks practiced this to decent effects and I can only guess The Wax Mask (1997) was aiming for this approach. The problem, though, is getting the right direction, plotting and/or timing done to keep things as interesting as possible and frankly, this movie just fails to work any part of the sudden twist fittingly. It just came out of left field on a note higher than one was expecting and its just too much to handle.

Yes, we could at least get some laughs out of it at the end, but I'm still feeling uneven with the whole movie; the murder mystery angle was nice enough despite the identity of the killer being awfully obvious, so I'm just left wishing they could have conjured up a more "in tone" ending to make up for the lackluster story as it's really out of place for a period horror film.

Memorable for the weirdest reason, The Wax Mask (1997) is a must-have for those who likes obscure foreign cinema, particularly those patient enough to endure weird endings. Not my cup of Joe but you do you.