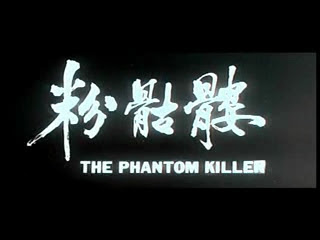 For defeating a group of terrorizing bandits many moons ago, a martial arts master named Siu became a local period town's favorite visitor, with many young town women smitten by him whenever he drifts by. However, what should have been another casual return to town for him one day, he learns that the women he rejected through out the years are now being attacked and killed off by a skull-headed monk known as The Phantom Killer. Though he suspected, Siu agrees to join a local detective in search of the perpetrator, who may or may not be an estranged potter, a bandit leader seen skulking around, or perhaps a jealous lover from before...

How can I describe this movie? As directly as possible, it's a slasher film with lots of high-kicking action and choreography, mixing the usual bodycounter plot of a vengeful killer loose slaughtering female victims with that of kung-fu action and a murder mystery angle. Not bad of a hybrid if you ask me, but those who're into straight slashers might feel a little disappointed as majority of the play leans more to the fights than the actual killings. True, we have a masked killer and a very fair bodycount, but most of time we'll be watching an old man do flying kicks and dodges against a killer who apparently knows martial arts, too. A trait that predates flying-kicking slashers like that gasmask killer in Sweden's Insane (2010) or even that of the obscure junk Junior (2002) (AKA "Engine Trouble").

What's good about Phantom Killer is that, despite trying its best to keep a straight face, it does take turns dipping into some cheese through some funny dialogue and kooky characters popping up as either red herrings or possible murder suspects. No character is boring and the movie paces itself quite nicely to a twist reveal that's awfully good.  Though some of the choreography can be a bit off, the fight scenes are still passable and fun to watch, this is coming from a guy who hardly watches Martial Arts movies!

My only complain about Phantom Killer is its lighting; some of the scenes that took place at night are so badly lit, hardly anything or nothing at all can be seen which is a pain since some of the fights and kills occurred during these and I had to rewind the movie over and over just to make sure I understood what happened. The love angle of the movie is also hammed to an awful sense; not saying it isn't funny, but rather it hardly works at all with the killings and investigations going on. (The film also stole the Phantasm (1979) theme and plays it whenever Siu's around for some reason. Ticks me off at one side since I'm a huge Phantasm fan, and chuckled on another since it kinda fits the situation.)

As a fun B-flick, it hits the mark just right. It's cheesy as the yellow moon and as out-of-the-wall as the ones they kicked open in the movie, Phantom Killer (1981) may not be the straightest to the slasher build-up, but as hybrid, you could certainly give this one a try!